True Crime in LFK, Vol. II: A Foot in a Bucket; A Cue Ball in a Crown Royal Sack; An Attack on Free State Brewery


When we asked our Twitter followers to send us their favorite weird LFK crime stories, the immediate favorite was " the dude who kept his foot in a bucket on the porch."  Indeed, it is one of the greatest articles you will find in the LJ-World, though the first line assures us that, in actuality, "there's no law against keeping your severed foot in a bucket on the front porch."  But the 2005 story does involve cops and potential crimes, and is certainly worth inclusion here.

When East Lawrence resident Ezekiel Rubottom had to have his foot amputated due to an infection, he did what any self-respecting ELFK resident would do: took it home, put it a bucket, turned the bucket into art, and allowed people to come take a look:  "He added trinkets to the bucket, including a porcelain horse and a can of Hamm's beer, to make it what he called 'a collage of myself.' " (LJ-World).

After the attraction's popularity began to grow, police heard about the crowds and confiscated the bucket.   "Police seized the foot Saturday, thinking it could have been evidence of a crime, but returned it after verifying Rubottom was the rightful owner."

We recently heard that Rubottom was back in LFK after an extended absence.  No word on whether the foot is still being exhibited.

Make sure to read the amazing comments section when you check out the full piece via LJ-World.  The article contains a photo of the bucket, which does not appear to be decorated.  There is no photo of the foot itself. 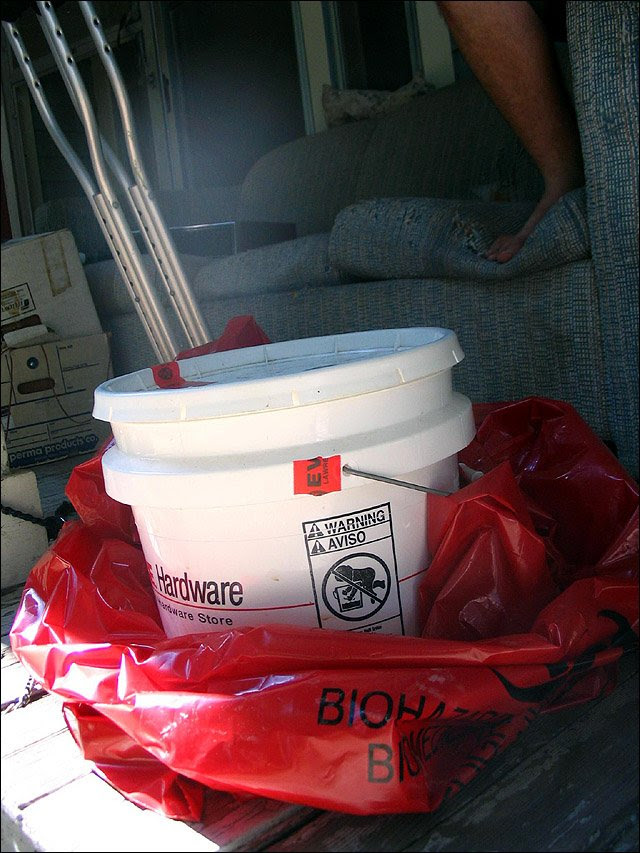 You don't really expect a good old-fashioned bar brawl in the elegant confines of Henry's Upstairs, but that's just what occurred in November 2009 when a fight between two men escalated into this: "The 53-year-old man then fashioned a weapon from a cue ball and what [Sgt.] Hadl said was or resembled a Crown Royal bag and swung it at the younger man, striking him in the back of the head." (full story via LJ-World here, also containing some outstanding talkback commentary).  We like to think of this incident as a drunken version of a gladiator swinging a mace.  Also, Henry's doesn't have pool tables, so presumably the man carries the cue ball and Crown Royal sack for just such occasions.

And then, from 2010, comes the terrifying attack upon the Free State Brewery patio by a "transient" wielding what turned out to be a railroad spike.  We're certain that those on the patio still regale family and friends with their heroic story of survival, and we certainly hope that the man who tackled the assailant was given a lifetime supply of free beer by the Brewery.  According to a talkbacker on the LJ-World article, the culprit had "HORSE" tattoed on one side of his face and "SHIT" on the other.  We sincerely hope that this is true.  The one photo we can locate unhelpfully provides no visual confirmation of the tattoo, but we love the image of the guy in the Bob Marley shirt looking on (peacefully) in the background. 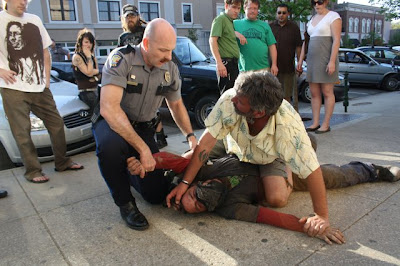