Readers, the smoke is finally starting to clear from yesterday's (globally-trending!) Twitter reenactment of Quantrill's Raid, so let's turn our attention to the usual hijinks here in LFK.

Speaking of annoying Raiders, this weekend's most high-profile event is certainly the Lawrence Busker Festival.  Is there any other event more hated by Lawrence-scenesters than this one?  We don't think so.  As always, remember that the buskers' primary goal is to pick your pocket when you're not looking and that almost of them carry knives, so be careful if you're out there on the streets.  We recommend keeping the children safely at home. A quick glance at the schedule reveals that a "World Unicycle Champ" will be on the scene and that Tyler Gregory is an official busker this year.

Get a jump on the weekend with some promising Thursday events.

The Comedy Freak-Out returns to Frank's tonight with Peter Lyrene and his humorous cohorts.  Will there be a lot of Quantrill jokes, or is 150 years still too soon? 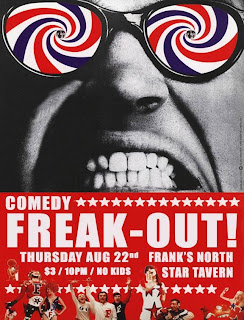 And our friends in Olassa open up for Elephant Revival at the Bottleneck tonight.  It'll be a foot-stompin' good time.  We're hoping some of the elephants from the Elephant Revival get loose and chase the early buskers down Mass. Street. 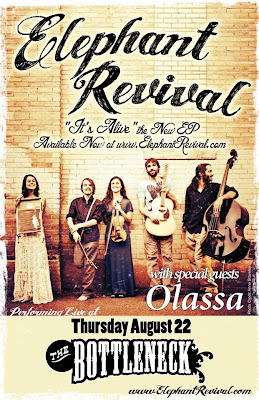 And end up at the Replay for Berwanger, who always has the BEST fucking flyers. 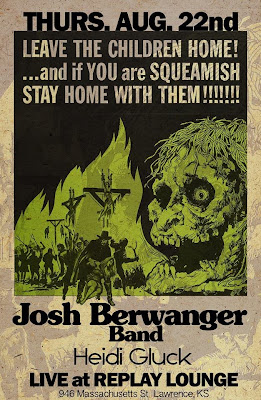 On Friday, the students return to KU in full force to move into the dorms. so it's best to get out of town.  We recommend you see Stiff Middle Fingers in KC.  This show also has an awesome flyer.

And the best bet for really weird shit on Saturday is the Jackpot, where Baiowolf and Destroy Nate Allen are on the same bill for an I Heart Local Music showcase.  The last time we encountered Destroy Nate Allen they were marching around, Pied Piper-style, followed by a bunch of tweenage kids at Drew Smith's birthday party (also at Jackpot).  Will these same antics work for the young Saturday night scenesters?  Probably.

Wrap it all up with the Fiddling and Picking Championships at South Park on Sunday and you've got yourself a nice little weekend.