Liberty Hall's Film Church series is back in fine form this Sunday with a 35 mm print of Almodovar's 1999 classic All About My Mother.  Free pastries and fruit.  Booze is not free but it's available too.  Visit the Liberty Hall site for full info.

It's a surprisingly good weekend at the multiplex as well.  We finally saw Blue Jasmine and are pleased to report that the Woodman is back with a VERY strong drama after a few summers of light comedies that were pretty good (Midnight in Paris) and not too good at all (To Rome With Love).  If Cate Blanchett doesn't win an Oscar for this, the ceremony should be cancelled.  Plus, Andrew Dice Clay like you've never seen him before!! (apparently he's a terrific actor).

Surely all you geeks spent Thursday evening with a triple-bill of Edgar Wright's Cornetto Trilogy, right?  Sadly, we didn't.  But we'll be seeing The World's End today finally.  Let's hope it's a suitably fitting end full of blood and ice cream.

But maybe you need something edgier?  The "mumble-gore" genre is so hot right now, and Adam Wingard's You're Next is poised to rake in some serious cash this weekend.  Even though we're bored with home invasion films, we're surprisingly interested in this because people keep using terms like "deconstruction" when describing it and it's apparently full of cameos from mumblecore filmmakers and such. And Chip is a sucker for tender indie coming-of-age films starring pretty girls, so we'll also be seeing The Spectacular Now, which is supposed to be pretty spectacular.  But we probably won't drive to the one fucking theater on the Plaza in KC where's it's currently playing.

The coolest film-related event of the week has got to be the debut of a new film/music/art festival at Screenland Armour in KC, though we find the prices discouraging for those who only have a few hours to spare (instead of just having $40-ish dollar festival tickets, why not offer individual screening prices for those who'd love to catch a film and band but don't have time to to stick around for the full fest).  One of the films on the slate is the new documentary on Big Star, which is definitely of interest to scenesters.  And we assume some of the excellent bands involved (Rev Gusto, Hidden Pictures, etc) will dish out a nice Big Star cover or two. And we've always got to include an Alamo KC pick in this column.  On Wednesday, you can see Escape from New York and your ticket comes with a free eye patch and candy cigarettes.  Yep, they're doing it right over there at the Alamo.  Details here. 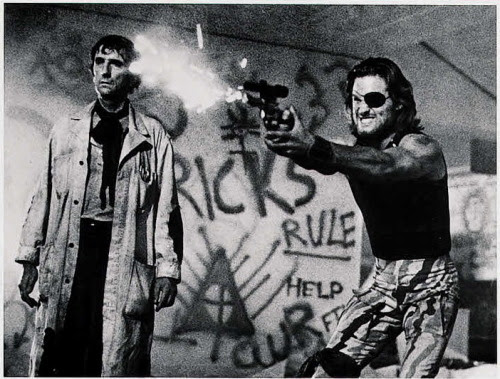