Our Interview With Sleepy Kitty: "Our band name inspires people to show us pictures of their cats."


Readers, it's a pretty great week if you're a fan of noisy-but-pretty male/female rock duos.  Sleepy Kitty, the pride of St. Louis, are hitting the Czar Bar in Kansas City on Friday (on a great quadruple bill with Gentleman Savage, Empty Spaces, and our pals Rev Gusto).  And KC's Schwervon will visit the Replay right here in LFK on Saturday (along with Sona).

We had the pleasure of chatting with Sleepy Kitty's charming Paige Brubeck before the gig.  Give them a "like" on Facebook here and listen to some tunes via Bandcamp here.  We hope you enjoy this interview in which we explore girl-group harmonies, the dangers of opening for Chuck Berry, and the importance of rescuing baby bats.  And make sure to stick around for Chip's final thoughts on this one.

Richard:  When I hear the name Sleepy Kitty I envision a very twee band (which I'd probably like) or a strummy coffeehouse folk band (which I probably would not).  But you are neither of those things.  Tell us the origin of the name and how you think it captures your sound or aesthetic.

Paige:  Besides making sound collages on the first day of collaboration, we were also watching a lot of cat videos. They're just so furry and tired! We needed a name to label our files in iTunes so we called it Sleepy Kitty and it stuck. It turns out I like being in a band called Sleepy Kitty because: 1) we love cats and 2) our band name inspires people to show us photos of their cats, which is pretty great. Also, not to get too art school on this, but a cat can be all soft and sweet and calm and then, all of a sudden, put its ears back and run or drop a claw into your toe. I think our music is kind of like that too.

Chip:  I’m going to level with you.  When I saw in your bio that you “began as an experimental sound-project” in an art class,  I was scared to listen, because normally when I read that kind of description a band is going to sound like they’re squeezing a bunch of different-sized frogs together to produce unusual croaks.  Thankfully, you don’t sound like that, and in fact the sound is generally quite accessible and very pretty.  I like those looping girl-group harmonies, which make me want to spin around and probably knock over boring-ass scenesters at the show. Finally, I suppose I should pose a question:  which girl-groups are your most important influences and what are your other primary influences (the more esoteric the better for our scenester readers)?

Paige:  If you had met us at that time and we handed you a copy of "Hustlin' Kets" that would have been way closer! I went to art school so it's practically required. No frogs, but our first recording was a 17-minute collage loaded with radiator hiss, distorted parakeet chirps, and footprints in the snow leading to a fireworks show. (And I couldn't have been more proud of that recording at the time!) You'll still find samples and field recordings in our current work but a lot of songwriting eventually snuck in too. As for the girl-group style harmony, I love that stuff. I can't not sing harmonies. My favorite girl group would definitely have to be the Crystals, but I just found out that Darlene Love is actually the voice on all my favorite Crystals songs, so I guess she's the real voice I respond to. The Goodies' "Sophisticated Boom Boom" is a key track for us too. As for other influences, Pavement is a big one. The Fall is crucial, specifically the Brixie years, and bonding over The Fall is one of the reasons Sleepy Kitty became a band in the first place. The Velvet Underground is my all-time favorite. I just think everything they did, both musically and visually, is swell. Also, I'm always striving towards the excellence of George and Ira Gershwin.

Richard:  It sounds like you two are tearing up the scene in St. Louis, winning “Best Rock Band” three different times in the Riverfront Times poll.  Tell us about the music scene there.  Is it welcoming? Is it clique-y?  And what’s the scenester beer of choice?

Paige:  When we first got to town it was kind of hard to figure out where the scene even was, and who was doing what. A lot of people in the St. Louis music scene are born and raised in St. Louis, so they all know each other and have been in each other's bands for a long time, so it was kind of hard to find. However, once we did, I feel like this has been a very welcoming scene, and once you know a few good people it leads to a network of a whole lot more excellent people. That's one of my favorite parts about the St. Louis scene. You can easily see great music almost every night of the week in town. It almost feels like a movie about a scene, because everybody knows everybody and everybody's up to something cool. If you wrote a script about St. Louis it would be too unrealistic, but that's what's cool about it. I will also say that I've met some of the best players I've ever met in this town. A lot of people here have really committed to music and are lifers that have been doing it since they were teenagers. You've got some people here with great tone and great playing styles who have really mastered their craft.

As for the scenester beer of choice? If you're on the South Side it is most definitely Stag. And I'm not just saying that because I won a Stag barbecue grill one night at the dive bar down the street.

Opening for Chuck Berry was pretty exciting, and suspenseful. It was a blizzard of a night in December and the booker called me that day and was like, "Hey, do you want to open for Chuck Berry tonight?" Obviously the answer was "Absolutely!"  So there's a snow storm and we're late when we finally get to the club, and one of the most nervewracking parts of the night was after we finished setting up and soundchecking. The sound guy comes up and says, "All right, great. Just do NOT play loud." What is loud? And more importantly, what is too loud? I've got a big Fender amp and Evan plays his drums pretty hard—lots of big drums and distortion and whatnot. Dude says, "There are two prices: there's a price for playing before Chuck Berry, and there's a price for playing too loud." He points at the green room door, which is clearly visible from the stage. "If that door opens up and a head pokes out, we're all in trouble." Every time I hit my distortion pedals, or Evan hit a crash I'd look behind me to make sure that door was closed. It never opened, and I don't want to find out what happens if it does.

As for other odd stories, Evan and I once saved a baby bat. True story! It changed my life. It looked like a tiny black baby gargoyle. So ugly it was adorable. Now I'm a member of the Wildlife Sanctuary and every time I see a bat at twilight I hope it's the little guy we saved. You should have seen him.


Richard:  We love duos, and we’re currently huge fans of the KC duo Schwervon, who recently relocated from Brooklyn (an odd move!).  Have you heard of them (and if not, please look ’em up and book a show with them!) and do you have any current or former Kansas City or Lawrence bands that you love?

Paige:  We LOVE Schwervon! They played in St. Louis and stayed with us here and we've caught up with them in KC. They're some of our favorite people, definitely in one of our favorite bands. KC's lucky to have em. We always have fun with Cowboy Indian Bear too, and I'll take this opportunity to say we saw Bleach Bloodz a few years ago in Kansas City and it was one of my favorite shows. I love the recordings too. I've been trying to find out what happened to them and if they're even still a band. Bleach Bloodz, wherever you are, lets play a show together!

Chip:  The Czar Bar show on the 16th looks like a blast.  I see that our young pals in Rev Gusto are on the bill too!  Leave us with a blurb that convinces our Lawrence readers that they MUST take a trip into KC to catch this show.

Paige:  Of COURSE you have to come out! The fortune in my fortune cookie says it's the best night of the year to clink drinks with friends and shake your hips a little. All the foxes will be out, and that same fortune assures me you'll meet a special character that night who will be important to you later. Who knows? It might even be one of us.

Chip [blushes and becomes convinced that Paige and Evan are swingers] :  I'll be there. [winks] 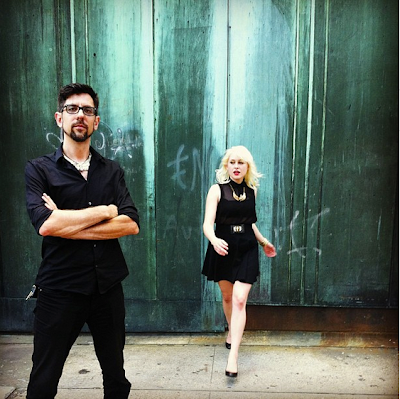