It's true.  LFK can now bill itself as the home of the WORLD air-guitar champion now that Eric "Mean" Melin slayed the competition at the finals in Finland with a scorching version of "Hash Pipe."  The next time you see him on the street it is REQUIRED that you drop everything you might be carrying and rock out with him, air-guitar-style, for at least five minutes.  Congrats, man! 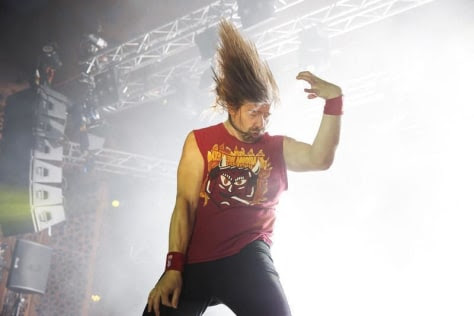 Here's the awesome welcome-back photo that LFK is "liking" all over Facebook right now.  He's got a real guitar!  It's currently Eric's profile pic.

The City Fathers are once again being a drag, man!  This time they want to follow the lead of numerous other college towns by banning LFK's beloved porch-couches due to their potential as fire hazards.  The LJ-World's Chad Lawhorn took to the porches and penned an odd front-page paean for yesterday's paper. Below is a Lawhorn-line that seems to be a reference to stripper-glitter?  He can be a naughty old goat!

"(Other items I find on my Oread tour: Stumps of firewood doubling as stools, a mattress in a yard, two Welch's fruit cocktail vending machines on a single porch, and a tantalizing amount of gold glitter in front of an Oread bar. It was fun to think about how that got there.)"

In the comments section, LawrenceTownie is absolutely outraged at the potential ban:

"My house is over a hundred years old, never had a front porch until 2006 when we added it. We wave at every car and person that happens by, and they wave back. CITY OFFICIALS WAKE UP. Front porch living is here to stay !!!! Revolts will happen everywhere in town if you try to change this one."

Well, let the revolution begin, readers, because the City Commission meets tomorrow on this subject.  Our best guess is that not many will be joining the angry "Townie" in his campaign because they're too busing smoking weed on their porch-couches.

Lawhorn's piece is lacking in porch-couch photos (in the on-line version, at least, there's not so much as a single porch-couch photo!).  Please tweet photos of your favorite porch couch to @larryvillelife .

Another Busker Fest has come and gone and scenesters hated it more than ever, but at least it did take a turn for the weird when LFK's own Foxy By Proxy burlesque group was granted a single closing slot on Saturday evening.  Somehow we suspect they won't be asked back.

"Thanks for keeping your four-to-seven year olds up past their bedtimes to watch women taking off their clothes on the street."

and (directed to the children):

"With student loans the way they are, a lot of you will probably become strippers when you're older."

Here's a cat-lady and a green lady and a Monzie-Dance: 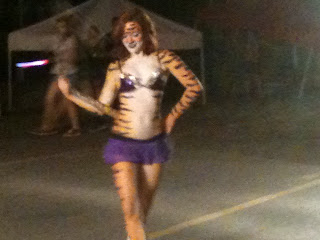 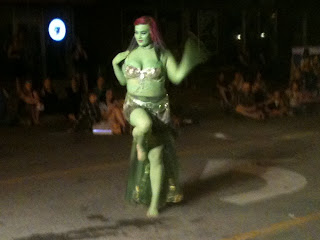 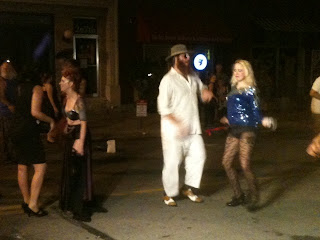 I've just downloaded iStripper, and now I enjoy having the best virtual strippers on my taskbar.