First off:  the big news of the day in LFK is obviously the Tharpe photo.  Chip thinks it's terrific.  But that's probably not what Coach Self will say.  Take a look here.

We try to catch shows from eccentric geniuses and cult heroes when they drop by LFK, so we had a good time with Mr. Jonathan Richman at the Bottleneck on Friday.  Richman arrived with very little local press to herald his arrival and with his usual rigid rules about sound (no music to be played in the bar before his set, etc). He took the stage just a few minutes after the appointed start time of nine, with no opening act, apologetic about his "lateness".  Still boyish in his early 60's, Richman smiled throughout, while longtime drummer Tommy Larkins smiled not at all. After an early admonishment to fans with cell-phone cameras ("Take a few shots if you need to, but why watch through a screen when you've got Jonathan and Tommy right here in front of you?"), everything was peaceful and focused.

--"It's Sam Cooke time!"--shouted in the midst of another song before dipping into a few verses of Cooke's "Having a party."

--And, of course, there were dancing interludes where Richman abandoned the mic and unleashed his loose-limbed dances, sometimes accompanied by maracas and cowbell. "I'm tired of singing, I'm gonna dance one!"

After about 70 minutes, Richman bade us farewell, warning the crowd there would be no encore because his father taught him not to wear out his welcome.  We'd welcome him back anytime.

Chip-quote: "Well, I'll be damned, that's totally the dude from There's Something About Mary, isn't it?"

We didn't want to take pictures for fear of being chastised, but here's a Richman flyer that we like:

Speaking of quirky cult figures, St. Vincent hits Liberty Hall tonight.  We saw her the last time she was at Liberty (impressive) and missed her summer show with David Byrne in KC (still kicking ourselves).   Probably we'll skip the show tonight.  But we'll follow along via your live-tweets! 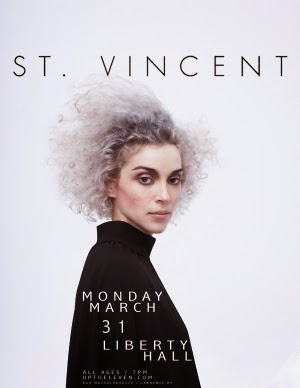 Sweet! I drew that Jonathan Richman poster. Glad you like.