Who is the quintessential Iowa band? You don't immediately know, do you?  Well, maybe it's The River Monks.  Some music scribes have suggested as much.  Find out what the buzz is about when these harmonizing Iowans make their way down to the Jackpot on Wednesday for a lovely, folky evening.  And, yes, scenesters, the Jackpot IS open on other nights besides the frequent I Heart Local Music Showcases!

Check out the River Monks' media page here via Temp Agency, give them a "like" on FB here, and listen to a track from the soon-to-be-released album Home is the House via Bandcamp.

Enjoy the interview with vocalist/guitarist Ryan Stier in which we discuss ukuleles, whistling, and the "wealthiest city in America."


Chip:  First off, are any of you actual monks?

Ryan:  No! Fair question though. Des Moines  means "The Monks" - evidently some French bros observed monks trapping fish/partying in a river, and named it (ehem) "La Rivière Des Moines" (River of the Monks). The city that formed around the river became Des Moines.

Richard:  I like the Tiny Mix Tapes description of your sound: "The River Monks might just BE Iowa."  But what does that mean to you exactly?  IS there a discernible Iowa sound or aesthetic? And do you feel like you embody it?

Ryan: We do honestly try and rep Iowa wherever we go. Iowa is definitely a huge reason why we sing about the things we do and sound the way we sound. We're not afraid to communicate that territorially-based pride in our sound.

Chip:  I think of myself as a terrific singer, though the folks at Burger Stand's Wednesday night karaoke often disagree.  But I'm always impressed by sophisticated harmonies, which I've never mastered.  Tell us about the band's harmonies and the difficulties associated with them.

Ryan: Six folks singing at the same time can definitely be tricky, particularly when you play in different venues with vastly different rooms and sound situations every night. It's an ongoing practice for all of us, and makes it relatively organic and effortless when you play in the nice venue with the great sound (we've all put a lot of time and study into our musicianship) but also a fun and challenging adventure when you're playing in the Stinky Mic venue.


Chip:  Well, good luck at the Jackpot, whose former name was actually The Stinky Mic, I believe.  But actually I hear the sound is better there lately.


Richard:  And in addition to the harmonies, there's some damn fine whistling going on in "Pelica," which I was just listening to.  Who's the whistler of the band?  Sometimes I can whistle and sometimes I can't.  Does it ever fail on stage?

Ryan:  We all take part in the whistling. It's good to be well hydrated and have some lip balm on hand, otherwise your whistle can quickly turn into spit-rain and unhappy front-rowers.

Chip:  I'm gonna be honest here. I sometimes have a hard time taking ukuleles seriously. Tell us about the role of the ukulele in your sound.  And why do you think they're so prominent in the indie-folk scene these days?

Ryan:  We use it primarily for atmosphere, particularly on our new album "Home is the House." It gets downright haunting actually. What IS with the uke craze lately? Probably because they're cute, cheap, every one who knows anything on the guitar can easily translate that to uke, and hashtags are The New Way. Mandolins? Sound prettier, but not quite as popular because they're tuned in 4ths, making them something to actually learn. I resisted the Amanda Palmer Covers Radiohead on Ukulele album until I realized she was making fun of the trend. But in the end, just like the guitar, (some) ukes too make a nice sound, particularly when used with complimentary layers. We absolutely try to make art with it, and lately we've put Tommy behind a curtain just to ensure spectators don't judge us by our uke-slinging right away.

Chip:  Oh, oh, one more thing.  Since you all hail from Des Moines, which the Today show just called "the wealthiest city in America," do you think you could buy me a bunch of PBR at this show?

Ryan:  Lawl, of course. I'm by no means wealthy, but I'll get your first drink for making me actually WANT to answer your interview questions.


Here are the River Monks about to embark on a river adventure: 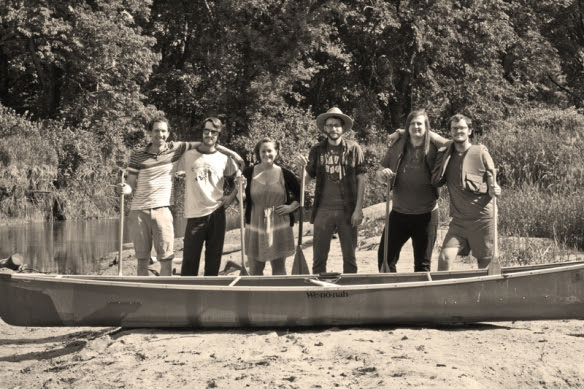