Theater Picks: Staged Reading at the Percolator; Expressionistic Musicals at KU; and Loaded For Bear At LAC


Readers, we bitch a lot about Theatre Lawrence and the safe theatrical fare that tends to dominate the Lied and KU, but it's actually a pretty good week for indie and experimental theater in LFK.  And, since we know you all love theater (!!), we're offering a few more picks in addition to those scamps in Loaded for Bear, who appear down below with a list of their favorite bear attacks in advance of their weekend shows at the LAC.

We haven't seen a play at the Percolator before, but Thursday night might change that.  A staged reading of "The Power of Duff" stars LFK's favorite late-night talk show host Mr. Mike Anderson.  Here's a summary from the FB event page:

"When burnt-out local TV newscaster Charlie Duff suddenly begins offering a prayer at the end of his nightly broadcasts, he instantly becomes a popular and controversial figure to an expanding audience. But even as his prayers inspire millions, Charlie struggles with his own beliefs and his inability to connect with his estranged son."

Is there a charge for this? We can't seem to spot it.  Perhaps someone will step in and clarify. 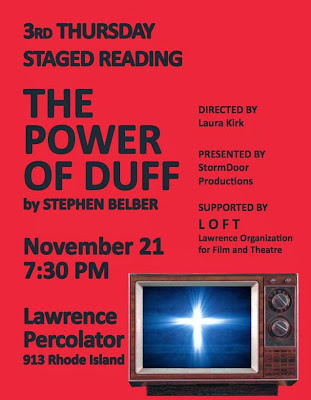 KU's University Theatre gets edgy and high-tech with a production of Adding Machine:  A Musical, based on Elmer Rice's great, weird Expressionistic play.  It was sold out all last weekend in the tiny black box, and we expect the same this time too.  So jump on tickets pretty quick if this is your kind of thing. 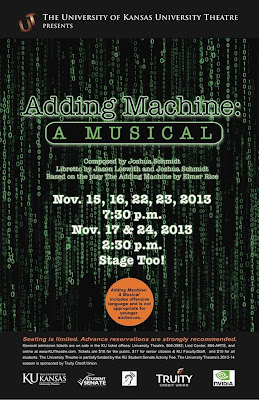 And, of course, there is Loaded For Bear 4, which will certainly be the drunkest of this week's theater picks (both cast and audience).  Below is their message for the day.

Loaded for Bear 4: Ad Astra Per Ursa – November 22 and 23, Lawrence Arts Center, 8:30 p.m. $9. Tickets available at the box office, or at lawrenceartscenter.org/calendar/


WHEN LOADED FOR BEAR ATTACKS!
By the Loaded for Bear Unpaid Interns

In the spirit of lists - something the Internet loves more than videos of cats, videos of people doin' it, and videos of cats forcing people to 'do it' at knifepoint - Loaded for Bear presents a not-all-derived-from-Buzzfeed-type-stuff list of the world's CRAZIEST BEAR ATTACKS THAT WE JUST MADE UP.

3) California, 1849 - At the height of the Gold Rush, prospector Josef Muller (who didn't see you come in there, by the way) nearly died after, you guessed it, a bear attack in the woods south of that place they found gold at that one time. The bear, being an Irish, was only spurred to attack when Muller found its pot of gold. Whilst attempting to protect its gold, the bear got drunk instead and then started a shouting match/fistfight with Muller that ended with the bear crying about the guilt it had for not being there when its mother died. CRAZY FACTOR: 1 1/2 maulings

2) Siberia, 1962 - 2 Russian cosmonauts suffered major arterial trauma after Svetlana, the first bear Russians shot into space (and they shot lots of bears into space - that was kind of their thing) soft-landed at their Siberian training grounds. Angered that the Russian space agency had zero plans to actually ensure her return to Earth or pay into her 401(k), Svetlana took her frustration out on the poor saps already trying not to die under Communism. CRAZY FACTOR: 3 shits in the woods.

1) Washington, DC, 1997 - After a particularly vicious mauling in the Oval Office, President Bear-ton went on national television to claim "I did not have violent relations with that hiker."  Yep, that's all I got. You try making bear puns about the Lewinsky scandal - it's not as easy as it seems. Uh, im-bear-ment trial - see what I mean.  Like President Bear-ton wasn't a stretch from the get-go. We're done here. CRAZY FACTOR: 4 1/2 scalps torn off by bears.

Welp, there you have it. Maybe next time there'll be gifs. But if you can't wait 'til next time, and/or prefer to see motion unfold linearly in time and space rather than repeated in a continuous closed loop, come see Loaded for Bear 4: Ad Astra Per Ursa, a new comedy show at the Lawrence Arts Center, November 22 and 23 at 8:30 PM. No bear puns – we promise.  Fingers still crossed on the whole “clean” thing though. 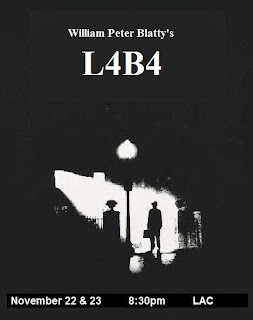