It's Guest Column Week With Loaded For Bear! First Up: Matt Gaus Tell You What's What

Those scoundrels from Loaded For Bear are back at the Lawrence Arts Center this weekend for their fourth installment of sketches, films, and general mayhem.  In case your PBR-addled brains have forgotten, these are a bunch of folks from the late, great Victor Continental show.

We're turning over the blog to them this week (at least partly) for a series of short pieces and promotions, kicking off today with Matt Gaus giving you the rundown on what to expect this weekend.

Get tickets at the LAC Box Office or via the LAC calendar page here.

We’ve done three of these already  – more than enough for your average Lawrence scenester to bitch about how the show was better two years ago, and how they were there, man, before it got ruined by all those posers who only showed up later for the eye candy and the Stalin impersonations. But what if you want to be one of those scenesters? Here are the whats, the whys, and the hows of Loaded For Bear 4: Ad Astra Per Ursa. By the end of this post, you’ll be indistinguishable from the bitchiest comedy groupie in all of northeast Kansas, an accomplishment which you can totally put on a resume.

What is Loaded For Bear 4? It’s the fourth in a planned seventeen-part series of comedic hootenannies brought to you by Card Table Productions (“The Victor Continental Show”). Two dozen live sketches, a dozen short films, no breaks, and no goddamned improv. The world of Loaded for Bear is a world of violent sandwiches, pretentious French artists, and adult undergarments, all available to you, for a limited time, for less than the price of a movie ticket. It features five of Lawrence’s Funniest People™, as arbitrarily determined by Lawrence magazine (Google it – that’s a real thing). Plus, it’s at the Lawrence Arts Center, so, you know, classy. Check us out on Facebook or YouTube for a taste.

How do I see Loaded for Bear 4? Well, that’s the easy part. For the low, low price of $9 American (plus possible online fees), you purchase a ticket at the Lawrence Arts Center box office (940 New Hampshire) or online here. Then you just show up prior to the 8:30 p.m starting time this Friday and Saturday, November 22nd and 23rd and bang – the best damn comedy you ever saw this week!

What’s the beef between you and David Schwimmer? That’s between me and Schwimmer. He knows what he did. Let’s just say snitches get stitches and leave it at that. 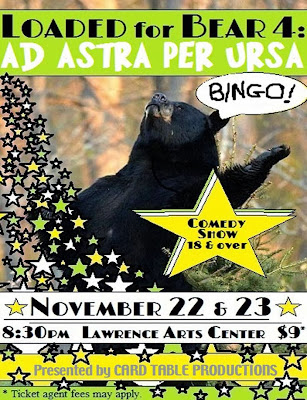