Our friends at Loaded For Bear finish up their week-long residency here at the LC with their best column yet, a moving reverie about an LFK man who is wearing two pairs of pants.  See Loaded for Bear on Friday and/or Saturday at 8:30 at LAC.  Tickets available via lawrenceartscenter.org/calendar/


GET LOADED FOR BEAR 4 INSIDE YOU

By Two Pants, Your Experimental Lover

NOTE: “Two Pants” is not affiliated with Loaded for Bear 4 in any way. He’s just a guy we saw hanging out at the Quick Shop at 19th and Mass. He was wearing two pairs of pants.

Picture a man in your mind. Not just any man, a specific man. He possesses all the qualities of a man: hair in body and face, the idea that the line between empathy and punching is razor thin, and a penis rather than a vagina. Don't picture his penis, though. Okay, fine, picture it for a moment... Done yet? Okay, thanks. A man: virile, hairy, enpenised, vibrating with the confused internal aggression which is a byproduct of modernity.

I know, the virility of this man in your mind has now increased a thousandfold. Feel free to salivate. Nobody is watching you. Even if they appear to be, it is a blank stare. Their internal machinery is too busy whirring away at the outcome of last night's sports or new episode of Cop Doctors.

Feel no shame, and allow the image of Two-Pants to envelope you like a blanket of bubblewrap, both comforting and exhilarating. He's like a tiger, with the sensuality of sinew and a strength born as much of agility as strength. And then he commandingly places his hand upon your knee and says,
"What's up, girl. Two-Pants. That's two for one. Put your tongue on my elbow."

And you realize with utter clarity that even though we exist in a world where sometimes you get a voicemail without the phone ever ringing, our bodies are made of the detritus of stars, and our souls are made of light, and Two-Pants's elbow tastes like Cheetos.

Now open your eyes and realize that the moments of true happiness in your life are fleeting, and if you want to make them last even a fraction longer then you'd better go see Loaded for Bear 4: Ad Astra per Ursa at the Lawrence Arts Center. This Friday and Saturday at 8:30pm.

And remember that Two-Pants loves you.


Past interview subjects are popping up all over LFK this weekend so let's dish out some a couple of old links for you.

Chicago's ShowYouSuck hits the Replay on Friday for a major hip-hop show along with many others including LFK-favorite Approach.  Reread our interview with ShowYouSuck here, in which we talk about girls and pizza.

Our old pals Reverend Peyton's Big Damn Band are back in town and at the Bottleneck on Friday.  Reread our 2012 interview here, in which we talk about fried potatoes and going fishing on the Warped Tour.

Now for the movie scene.

Over at Alamo Drafthouse KC, a weekly "movie interruption" event is kicking into high gear on Sunday.  If you're unfamiliar, this means that comedians (in this case Doug Benson and Chris Cubas and pals) will sit in the front row and heckle some old flicks.  It's one of the few occasions where (certain) people can talk in a Drafthouse chain without fear of permanent banishment (as in the recent case of poor Madonna... guess she should have been more polite during 12 Years a Slave).  Watch these funny fuckers give Halle Berry's ghost flick Gothica the business on Sunday at 7:30.  Details here via Alamo KC and watch the trailer for the "interruption" via Vimeo.

---
Sure, most people will be seeing the new Hunger Games flick this weekend (though personally we're waiting for David O. Russell's upcoming American Hustle to get our Jennifer Lawrence fix, since it has a a much higher chance of some nekkid J-Law action).

But what's on the indie circuit this weekend?

Or you can check out Dallas Buyers Club.  Matthew McConaughey lost a shitload of weight for this film and, as we all know, this usually adds up to instant Oscar.  Jared Leto is also supposed to be awesome, so let the Leto cult assemble. 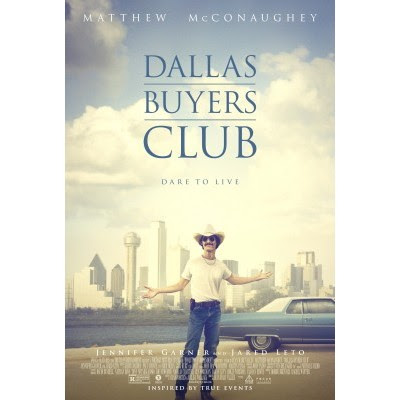 When are you going to tell us what's really going on in Larryville, Richard?