Readers, we're especially excited about today's Riff Raff interview because it's our first time interviewing a true viral video superstar! Chip believes that this interview will soon "go viral" as well (though he's probably mistaken, since he and Riff Raff didn't have time to record a rap about boners together).

For those who may be unfamiliar, Riff Raff is a Houston rapper (currently signed to Diplo's label), an MTV star (From G's to Gents), and someone who will apparently be brought to life on the big-screen by the ultra-prolific James Franco in an upcoming film by Harmony Korine called Spring Breakers (no shit!).

For more trenchant commentary on the man and the myth, we'd suggest taking a look at a recent Gawker profile here and an LA-Times piece here.  But, first, read our interview and quickly snag your tickets to see Riff Raff at a very special edition of the Bottleneck's weekly Goomba Rave this Thursday, August 23, alongside Lil Debbie ("Chip: "Her video for 'Squirt' is SUPER-SEXY") and the usual Team Bear Club shenanigans.

Enjoy this interview, in which we present Riff Raff's answers just as he offered them:  in ALL-CAPS and with unusual punctuation!

Riff Raff:  BEiNG THAT i DONT VEiW MYSELF FROM THE PAST PRESENT OR FUTURE TENSE i LiKE TO THiNK OF THE WORLD FROM MY OWN PERSONAL POiNT OF VEiW AT WHATEVER TiME i FEEL THAT iS RELAYED TO ME iN CONJUNCTiON WiTH MY WELL BEiNG TO PROGRESSiVELY GROW SUCCESSFULLY FiNACiALLY AS WELL AS MENTALLY.

Chip:  As best as I can tell, James Franco is in EVERY art/music/film project right now and the word on the interwebs is that he’s playing you in a film by Harmony Korine.  What’s going to be Franco’s biggest challenge in bringing Riff Raff to life on the big screen?

Richard:  The Gawker profile piece references everything from Dr. Seuss to Dada in describing your rapping style?  How would you describe your own style and who are your primary influences?

Chip:  In "Orion’s Belt," you rap “When it comes to hateful words, I got skin like a rhinoceros”  To what extent do you pay attention to what dumbshit interweb bloggers like myself say about your work?

Riff Raff:   i LAUGH AT iT ALL iTS SO FUN & FUNNY TO THiNK THAT CHERRY COKE & CHERRY PEPSi DONT TASTE ALiKE BUT THEY DO KiNDA TASTE ALiKE AT MiDNiGHT


Richard: I like the wide-ranging pop culture references of your lyrics.    What’s your favorite line you’ve ever written or free-styled?

Riff Raff:  "SWUNG THRU OLiVE GARDEN GETTiNG EGYPTiAN MASSAGES ... CUZ i LiKE MASSAGES ..". OR

"iM AFFRAiD TO WAKE UP ON A BED THATS NOT MADE OUT OF DiAMONDS .. iM AFRAiD TO POP THE TRUNK AND THE 5TH DONT START RECLiNiNG"

Chip:  “I’m loving your new Three Loco project with Andy Milonakis.  In “Neato,” Andy’s rapping about how he “be getting bitches in his blue tuxedo.”  Are you guys getting laid as much as those hardcore, gangsta rappers, do you think?

Riff Raff:  ASK ANDY ABOUT HiS 4 WiVES THAT HE HARBOURS iN UTAH WiTH KARL MALONE

Check out the "Neato" video:

Richard:   You’ll be performing at the Goomba Rave at the Bottleneck on August 23rd along with Lil Debbie? What’s it like collaborating with Lil Debbie and what kind of hijinks can our readers expect at this show?

Chip:  Do you ever get a boner when performing with Little Debbie and Kitty Pryde.  Because I sure do when I watch those videos!

Riff Raff: YOU CAN HAVE THEM BOTH .. i DONT HAVE SEX WiTH ANYONE


Chip:  I fucking love your strange, rambling "Brazil Bad Bitch Stripper" video, partly because I'm also a huge fan of Budweiser and Tony Chachere’s seasoning salts.  But where did you get what you call your “stupid Jack o’lantern Michael Meyer chain” and where can I get one?

Here's Riff Raff showing you his pad in Brazil, which is very well-stocked with Tony Chacheres seasoning salts, as all the best cribs must be. 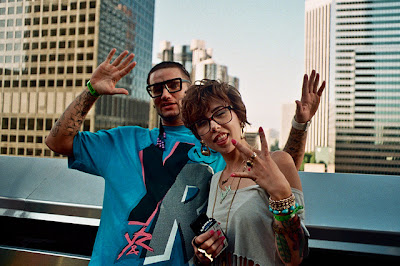 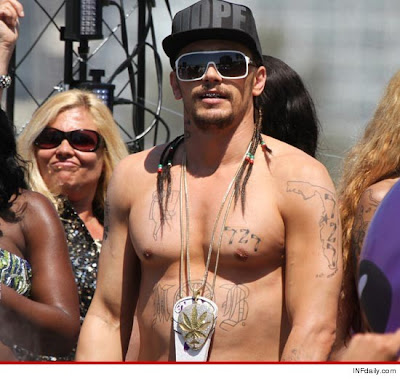 And here are some show flyers.  Go to the Bottleneck on Thursday and get weird!

I have just installed iStripper, and now I enjoy having the sexiest virtual strippers on my taskbar.