Sunday Scenester Pick: King Tuff at the Replay / Favorite Busker of the Weekend


Kyle Thomas' one-man band King Tuff hits the Replay tonight and these two excerpts (from Pitchfork's 7.8 review of this year's self-titled Sub-Pop album) should be more than enough to get you hyped:

"His charisma is magnetic, his shows are akin to cheap-beer-soaked tent revivals, he combines the stadium-sized guitar licks of Erik Cartwright with the bratty whine of Eric Cartman, and his solo debut, 2008's Was Dead, was the sort of album most scuzz-loving musicians would incinerate their garages to make."

In "Keep on Movin'", [Thomas] shouts out arcane dance moves and, in his own words, lets his guitar (whose name is Jazijoo) drool. He lets out a comically puny bark in "Stranger". He gives his songs titles like "Loser's Wall" and "Swamp of Love", which sound like landmarks where misfits in the Deep South meet to make out."

Chip:  "My favorite make-out spot in Fort Scott was known as 'Blue Balls Hill, but I liked to call it 'Boner Mountain.'"

Richard:  "Do any of you local rockers have hilarious names for your guitars?  IF so, we'd like to hear them." 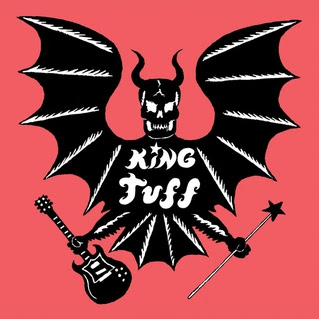 We've seen some solid busking this weekend, ranging from hula hoops of fire to wildly dangerous-looking pogo stunts to comedy contortionists, but perhaps our favorite was Shibaten and his didgeridoo.  Why can't LFK bands rock a little didgeridoo on occasion?

Chip: "That's a didgeridoo?  I just assumed it was a bong?"