Readers, do you love surf bands from Alabama that wear Japanese Kabuki masks and are obsessed with Japanese monster movies and speak only in short and often bewildering broken-English responses!  We'll assume the answer is yes, so make sure to head to the Czar Bar in KC this Wednesday, Aug. 22, to catch Daikaiju in action along with openers My Rotten Self and The Conquerors.

Find a full slate of press materials for Daikaiju over here (including videos and songs such as "The Trouble With Those Mothra Girls").

Enjoy the interview, in which we talk with these masked maniacs about monsters, masks, Men, Astromen, and Mothra girls!

Chip:  I love every band that wears masks.  But why all the secrecy?  What are you hiding?  Are you actually a bunch of sensitive bearded folksingers?

Team Daikaiju: Daikaiju hide nothing!!! The mask reveal the man!!!


Richard:  As your name and song titles immediately reveal, , you are inspired by Japanese monster movies.  How does that play a role in your sound and your stage show?  And what’s your favorite Japanese monster?


Chip:  You guys seem a little weird for Huntsville, Alabama. If I had worn a Japanese Kabuki mask in Fort Scott, Kansas, I’d have gotten the shit kicked out of me on a regular basis.   How do the southern crowds react to your shenanigans?


Richard:  Pitchfork gave your self-titled album a nice review with a 7.8, offering this description of your sound:  “Though their sound is closer to Man...or Astroman? than anything else (it's of course possible that there are members of that band hiding out in their ranks) there's a certain degree of prog muscle behind all that reverbed shredding.”  How would you describe your own sound and influences?  And are there REALLY members of Man…or Astroman in your band?


Team Daikaiju: Daikaiju make BATTLE-SURF-SEX-METAL and also take many vitamin to fight all influenza!!!  Daikaiju have many member of man: secret-man, rock-man, hit-man and mobile-man!!!  Daikaiju also like taste of astro-man but have preference of lizard-man… or aqua-man!!!


Chip:  My favorite song title of yours is “The Trouble With Those Mothra Girls.”  But since your music is all instrumental, I still don’t know what the trouble is.  Can you explain?

Team Daikaiju: YES!!!  You listening but you not hearing the trouble with those Mothra Girls!!!


Richard:  You guys recently had a pretty major European tour.  How would you describe the differences between European and American audiences?  Also, have you ever toured in Japan?


Chip:  Tell our readers what to expect when Daikaiju take over the Czar Bar in Kansas City on August 22.

Here's Daikaiju in full attack mode and below is a video of "Double Fist Attack" which begins with a nice spanking and then features a lot of dancing, ninjas, and assorted kung-fu treachery.  We think you will like what you see. 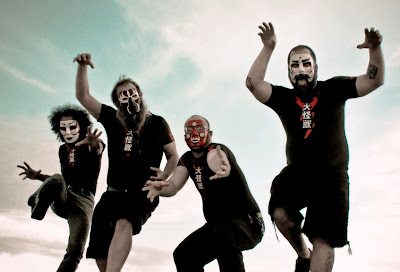