Laissez les bons temps rouler, readers! It's Fat Tuesday and, if you're anything like us, you've been downtown all afternoon following around Mike West and his costumed Mardi Gras revelers. Here's a shot from soon after the parade's arrival at Free State. As we say in Kansas, it ain't Mardi Gras till Katie Euliss smacks you on the ass with a tambourine. 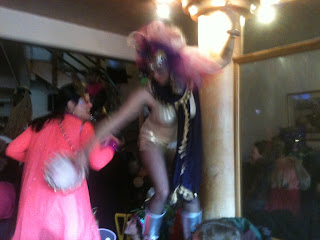 
But in other news, it's an artsy week in Larryville. Public art scholar The Urbanologist spent the weekend rambling around our fair town, taking pics (such as Wayne Propst's babydollhead in the tree outside the Pig), and offering his thoughts on public art both local and national last night at the Library. In attendance: Amber Hansen, who is poised to take the Larryville art world by storm next month with her already controversial project called The Story of Chickens: A Revolution in which we'll all get to know some chickens at various locations for a month and then kill and eat them at the Percolator. We're fucking hyped! (Amber, if you read this, we'd love to shoot you a few email interview questions).

And of course another Final Friday is on the horizon on the 24th. Two likely hotspots: (1) Wonder Fair (their exhibition "Chop Chop" will feature former Wonder Fair-ian Lie Piechocki’s "imaginary interiors...filled with beach balls, kitsch dolphin posters, and stray fluorescent marks") and (2) The Pig (their exhibition is called "Trash Lion," which we hope is a bunch of lions made out of garbage).

Visit the Final Fridays Wordpress site for a full slate of events.
Posted by Nog at 8:08 AM