Weekend Scenester Picks: Galaxies at Replay and The Devil at the Jackpot / LJ World Rant of the Week

After a night of pure seething rage during the Mizzou game tomorrow, you'll likely need to calm down with something twee. Consider checking out Colorado's Galaxies, who have a song called "At the Zoo With You," which is just about as cute as it sounds ("Prolific musician Dillon Groeneman has a knack for melody--he can pluck a pretty progression from his thin Colorado air and slip it into the satchel of a song with the deftness of a professional orchard hand." --yvynyl). Listen here .

And across the way at the Jackpot tomorrow, The Devil will return (for the first time since her New Year's Eve show, as far as we know). The Devil is joined by Minden and Gun Show. Take a look: 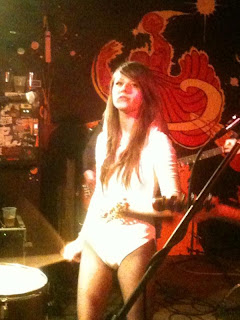 We love a good rant in the LJ-World talkbacks and Alceste is one of our favorites. His following response to the Eastside's concerns over Compton's new downtown hotel has a little bit of everything we love in a good local rant, including (a) a lament for the Larryville of yesterday, (b) an attack on local progressives, and (c) the author referring to himself in 3rd person. Enjoy!

"Neighborhoods change and that's all there is to it. East Lawrence isn't really a singular neighborhood anyway: It has pockets of pleasant and quaint along with pockets of pits and despair.

The "new" Downtown is lost to the middle class.....the "lofts"; the apartments; "the trend" has all been about catering to the wealthy and that's just the way it is in Lawrence, anymore. It's too late, Boz: There is no turning back in Alceste's view. The Lawrence of yesteryear is gone....and has been for a long time. No more Duckwalls; No more A&P; No more Town Crier; No more John's Novelty; No more Deluxe Cafe; No More Union Cafe; and on and on and on. Better to have a hotel in conjunction with rich people apartments than yet another bar or overpriced trinket store.

To heck with Soden, president of the East Lawrence Neighborhood Association and to heck with the East Lawrence Neighborhood Association. Downtown belongs to everybody and not just select "interest groups". I venture to add that the vast majority of Lawrence living people seldom go Downtown because of these "interest groups" (boutique shoppers; frilly diners; and lastly, gun and knife toting bar hoppers.) By adding a hotel which shall compete with the grossly overpriced and under customer oriented Eldgridge perhaps an entirely new quality of people will be in the Downtown area.

Old Alceste would very much enjoy residing in an apartment in the Downtown but accepted long ago ain't nobody going to cater to Alceste's income or rather lack thereof. Try all you like, but you'll never be able to stop the gentrification of Lawrence. It's too late....it's already here and there's no turning back. Live with it. *shrug*".

Read the article about the hotel and the full talkback at the LJWorld site
Posted by Nog at 10:47 AM