Sharkbite Hangovers / Kickball Post-Season Begins / Scenester Pick of the Day: Jessie Torrisi and the Please Please Me at Replay

Readers, if you're like us, you woke up this morning with a throbbing Sharkbite headache and a cougar or two in your bed after attending the Sandbar's 22nd birthday/street party event last night.

Chip: "My cougar insisted on roleplaying a shark and shark victim scenario. And she also insisted on being the shark."

Our feminist readers: "Good for her in taking the power position instead of the victim role!"

Our feminist readers: "Be glad she didn't chew your little phallus off."

The street party was a blast as usual, with Chip sliding down the 40-foot inflatable shark slide while Richard (on the Tap Room patio) caught a no-frills, rocking set from The Magentlemen, who seemed a little out of place at this event with their complete lack of Buffet covers (the Sandbar fans in their patio pen looked a little bored). This was followed by the ever-popular Sandbar dancers and, finally, Mark Valentine and the Hammerheads, who presumably brought the Buffet covers that the fans demanded. By this time, however, we had adjourned to the Burger Stand to catch a hootenanny by MAW, who were playing songs about mules and murdering in the front window, along with some Tupelo covers ("Warfare!").

Here's a photo that we're 50% certain IS actually Johnny Depp mingling in the street (if he's got time to make FOUR shitty pirate films, he's probably got time to hang with folks at a Larryville street party). Later he showed up drunk at the Burger Stand with a guy who looked shockingly like the Geoffrey Rush character in the films. 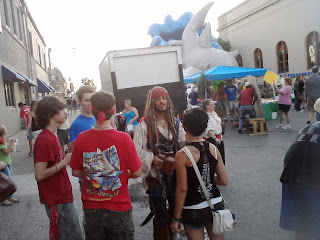 We did not make to the evening's hippest event: The Ettes at the Replay. Who did? Johnny Hamms, perhaps? If anyone submits a review, we'd love to read and publish it.

The greatest time of the year in Larryville is underway as of this evening: kickball post-season. If you've left your house at all this week, you've no doubt heard and participated in a lot of bracket talk. Make sure to turn your bracket in by 5:15 today to be included in the bracket challenge, explained here by Coach Billy Gay Cyrus:

"Winner of the bracket challenge gets the satisfaction of winning. I’d offer a prize, but I’m not totally convinced one of you wouldn’t throw a game for a 12-pack of Hamms. Seriously, I need to say that there is some concern that any type of contest or betting could influence reffing, so let’s just all recognize how uncool that would be and plan to use our moral and ethical compass to guide us past such temptations.

Still working on a catchy name for this part of the season… Kickapalooza? August Awesomeness? Kickrocksas? Dances With Kickballs? I’m leaning towards Lawrence Fucking Kickball. Somebody please help me. Good luck on the bracket and on your games, I’m getting super excited for tournament time."

We vote for Kickrocksas (because it's the silliest!). But Lawrence Fucking Kickball is good too, and seems to have carried the day over at the kickball blog , which you should visit for all the predictions and info you could ever need for tonight's opening match ups.

While most of the town Hamms it up at Hobbs, we'll be at this evening's Replay matinee for what's shaping up to be a kick-ass show by Texas's Jessie Torrisi and the Please Please Me. Here's a bit of the bio from the official website .


"The band swivels hips & switches instruments, bringing the circus to life.   Onstage, Jessie sings from behind the drums like a female Levon Helm, beatboxes, duels with her trumpet player, & pulls the audience up to kazoo."

Richard: "The last participatory-kazoo show I saw at the Replay was Portland's The Builders and the Butchers. If this is half as awesome, I'm in." 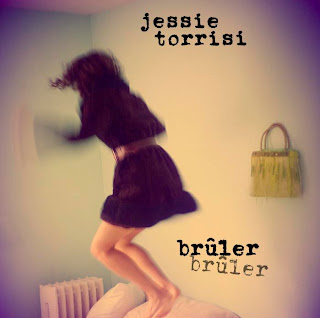 Fun recap of the Sandbar block party! It's always entertaining to read your take on events. Glad you made it out for the shark slide!

Thanks for reading and retweeting, Deb. We'll see you at the next Tweet-up. Is the 80s themed party really happening? Chip wants to wear his Cosby sweater.

Would love to make the 80s tweetup happen. Will keep you posted!