You may remember that our friends at the Lawrence Public Library unexpectedly had a phenomenon on their hands last year when the first batch of Banned Books trading cards appeared and garnered national media attention.

Well, a new batch is ready, and LPL and Liberty Hall are hosting a silent auction and award ceremony on Thursday to celebrate.  You can find details here via LPL but some late-breaking news is that none other than WORLD champion air guitarist Mr. "Mean" Melin will be entertaining the literary types along with plenty of other hijinks.  And there booze, obviously.  The event kicks off at 7:00 with the winning entries announced at 8:00.

Here's an example of a possible winner:  Maggie Allen's bad-ass card for Jaws.

Check out other contestants here via LPL.

While we'd never condone banning books, if any book should be banned, it's surely the new edition of Faulkner's As I Lay Dying featuring James Franco on the cover (promoting Franco's film adaptation of the great novel).  For fuck's sake, Franco!  This book cover is one of the worst things you've done so far.

Chip:  "Scoff as you may at Franco, I can't wait for a Faulkner adaptation that prominently features Kenny  Powers!' 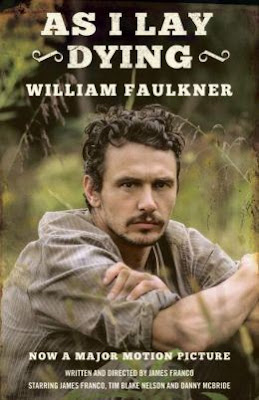