The first-ever Banned Books trading card ceremony was a success at Liberty Hall last week, complete with air-guitar theatrics by Mean Melin and a bizarre "Banned Books ballet" featuring the evening's host Mark Twain.  Make sure to pick your cards up each day this week at the library.  Yesterday's was Bless Me, Ultima (banned for Satanism and "religious viewpoints") and today's is Leaves of Grass.  Click here for a great pic of LFK mayor Mike Dever proudly holding a copy of this "satanic" Bless Me, Ultima.

And here's a pic of Chip's thumb holding yesterday's card: 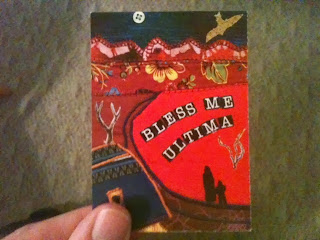 We like Horror Remix but sometimes the re-cut versions of the films are STILL too long for our taste, even at a 30-40 minute range.  So we're excited about the "Variety Show" edition which hits the Bottleneck tomorrow.  As we understand it, there's only one featured film this time ("a classic evil kid movie" called Don't Go To Sleep) along with an hour of random madness from various films.  Visit the website here.

If horror movies are not your thing, how about dancing around outside under the moon to celebrate the beginning of fall?  Head to the Percolator for an event called "Harvest Moonsongs" which promises
"an evening of equinoxial celebration and harmonious joy."  CS Luxem is among the featured performers. so it's certain to get weird.  And there's poetry too.  Chip is rolling his eyes right now.  Visit the FB event page here to find out that 33 of your moon-loving friends will be there.  Most of them are almost certainly from ELFK.

Here is the featured image from the FB page:

You foodies will be pleased to know that Merchant's Pub and Plate is indeed up and running and we stopped by over the weekend to sample a fried walleye sandwich (good) and a dessert topped with apple cider ice cream and bacon (good, obviously).  Also, the fries are FAR superior to Free State's sad-new replacement fries.  Dennis came in wearing a tail while we were there, and seemed to give the place his seal of approval.  The only downside was that the restaurant was out of the first beer we tried to order from the 30-beer menu ("Don't think we have that one today.  What's your backup beer?").  We look forward to future visits.

Over at the Burger Stand we weren't quite bold enough to try the "Goose, Goose Dog," a roasted goose leg served on a bun with gooseberry jam.  It was a one-night special (we think?) as part of a Wonder Fair print event. Burger Stand connoisseur Colin pronounced the dish "surprisingly lackluster."

But we're big fans of this fry-munching dinosaur currently stationed in the front window!