It's not easy to lure a scenester out of Larryville, but the promise of Elvis Costello, a "Spectacular Spinning Songbook" wheel, and a go-go dancer booth convinced us to make the trek to Crossroads in KC on what was surely the hottest day in recorded history. Did we love it?

Richard: "Yes. I especially dug the second-encore jamboree with the Southern sisters from the opening act, who added some sweet pedal steel to 'Sulphur to Sugarcane' with Costello vamping it up to lyrics like 'I gave up married women cause I heard it was a sin / Now I'm back in Kansas City I might take em up again." Who doesn't love when singers include the name of the city they're in!".

Chip: "The only thing I demand from a show like this is that the hits be played with absolute fidelity to their recorded versions, so that I can sing along, obnoxiously. But Costello slowed 'Alison' down to an odd rhythm in the first encore and then it morphed into 'Tracks of My Tears,' and 'Somewhere Over the Rainbow,' and 'Purple Rain.' Confusing."

An observation about the evening: KC should smoke better weed. It smelled like a fucking skunk was loose in the Crossroads!

Here's a picture Chip took. You can't tell it, but Elvis Costello is up there! 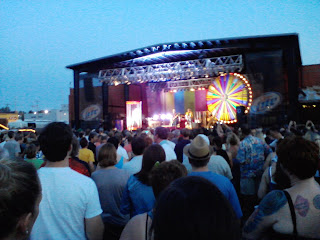 1) Tour of Lawrence bicycle races! (Chip: "Because what Larryville needs is more bicycles on the streets."). Join us outside the Sandbar tonight and enjoy a Bahama Mama and a heatstroke.

2) "Megalomania" at the Replay matinee tonight (a bunch of megalomaniacs such as Eric Mardis and Jeff Stoltz will croon tunes for your enjoyment).

3) Hospital Ships at Replay tonight (Have you heard they have a new album?).

5) Jammin for Joplin at Bottleneck on Saturday (see yesterday's post, and please attend).

6) Mudstomp Midwest Takeover at Granada on Saturday (a full day of jamborees and hootenannies; we kind of love the name Honky Suckle).

7) Split Lip Rayfield at Replay for "annual fish fry" matinee on Saturday (we're pretty sure there's never been a fish fry there before and probably won't be tomorrow, but Split Lip, presumably, WILL be playing).

8) Spook Lights at Jackpot on Saturday (ask them how the film's coming along and if there's still a possibility that Chip's boner can do a cameo).

9) Local food and fireworks in the park on Monday. If you're not into that scene, consider the Harry and the Potters matinee at Replay, in which the area's biggest geeks will jam out to some costumed "wizard rock" while discussing how long ago they purchased their tickets to the midnight premiere of the final film. Later that evening, Fourth of July will perform their annual Fourth of July gig at the Replay to celebrate their namesake holiday. Rumor has it they may be wearing Cat in the Hat hats!
Posted by Nog at 6:14 AM

Chip's boner gets a firm, long cameo-- if h can keep it up.

he needs a fluffer said...

We assume you keep one on staff?