It has recently come to our attention that there are actually more events occurring this weekend in LFK in addition to the Loaded For Bear shows.  Who knew?  So today's "very special message" from the Loaded For Bear gang is followed by our usual weekend picks.  Stick around.

LOADED FOR BEAR - A NOTE FROM THE DIRECTOR

I grew up in small town in Lawrence, Kansas (You probably think that's a typo, but you'd be wrong - I consciously chose that preposition because that's what doctors do). There I was not class president at school. Looking back, I don't think they had a president. Or a school. Wait, no, they had a school. I went there. I think it was Broken Arrow.

After school, I did way more school because you have to to be a doctor. Then I started Loaded for Bear with another guy because, to paraphrase science, we could. I can't write prescriptions with my doctorate because life is bullshit. Also, I will never find love.

This year's Loaded for Bear, the FIFTH show we've done, says it does not O.K. but that's a lie. It does O.K. In fact, I'll use my authority as a doctor (the registrar still has my diploma, could you go pick it up for me? I'll spot lunch if you can) to say that Loaded for Bear is fully O.K. to the point of surpassing O.K. while also running a mild fever. Normally I'd prescribe indomethacin but I don't get to be that kind of doctor.

But you don’t have to take my word for it. Here's an excerpt from my review of our show:

"For the opening scene of LOADED FOR BEAR to have maximum impact, it’s probably best to go in knowing nothing about its protagonist’s profession, which is unfortunately revealed in the poster, if not the title itself. Waking in an anonymous hotel room, LOADED FOR BEAR stares at the naked woman he bedded the night before, while his ex-wife calls him to argue about money. Bleary-eyed and surrounded by the remnants of a party only hours dead, he swigs the dregs from a beer bottle, stumbles around the room, does a line of coke to get straight. And then he eventually strides confidently into the hallway in his airline pilot’s uniform, to the tune of Joe Cocker’s “Feelin’ Alright.” Directing his first live-action LOADED FOR BEAR since 2013’s LOADED FOR BEAR, LOADED FOR BEAR paces it brilliantly, slowly ramping up the energy from hungover lethargy to coke-fueled confidence, while creating undercurrents of dread as LOADED FOR BEAR hits his stride. LOADED FOR BEAR looks the part of the perfect pilot, and he may feel all right, but beneath the surface, something has clearly gone wrong."

Actually that’s a review by Keith Phipps, formerly of the A.V. Club, of Robert Zemeckis’ 2012 film “Flight” starring Denzel Washington. I just changed some names to LOADED FOR BEAR for some reason. I don’t have a problem with that. I have a doctorate. You ask me if I have a God-complex. Let me tell you something: I am God.

So to sum up: I like Loaded for Bear and you can too if you come see it. You better believe it's DOCTOR APPROVED! And Denzel Washington's really good in "Flight." So's Don Cheadle, but that's no surprise there. 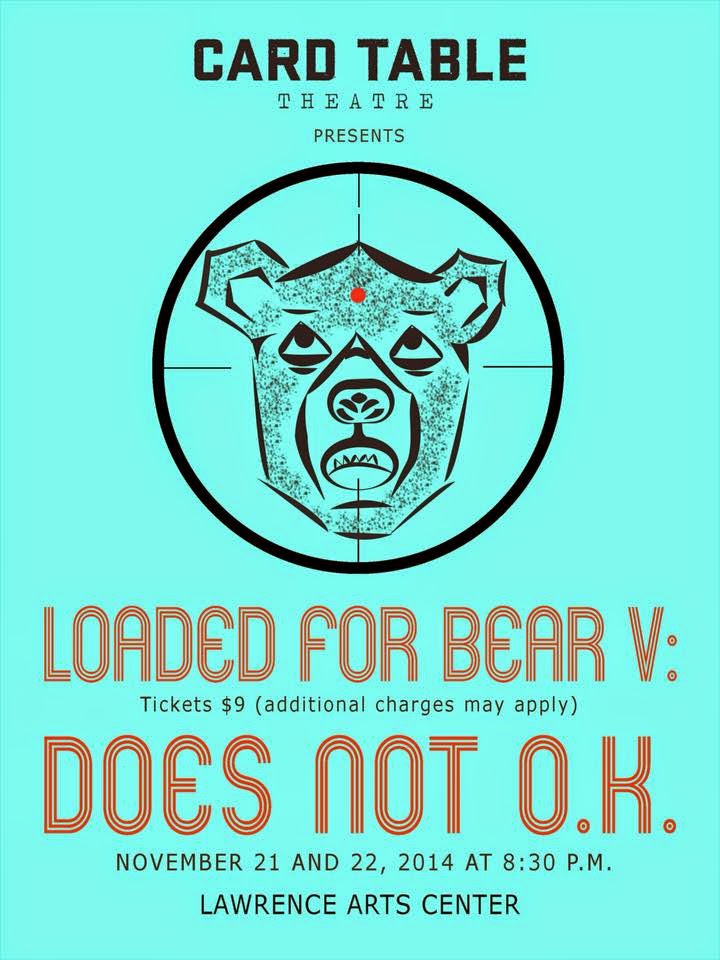 
There is no "Good Time" comedy show at the Replay this evening because the Harpoon Presents crew is engaged in some other hijinks:  an event at Pachamama's Star Bar called "7 Minutes in Purgatory."  It's sort of based on the old "7 Minutes in Heaven" thing, but we're pretty sure you don't have to make out with a comedian in a closet.  Instead, comedians will be "telling jokes in a sound proof room as the crowd watches them panic on a video screen."   Instead, the comedians are " The cost is only $3.  You'll want to see this.  Details here.

Head to the Replay after the comedy and watch Til Willis tear the roof off, along with Wells the Traveler and E100.  You can always count on Til Willis shows to feature bad-ass posters too.

Liberty Hall hosts a 50th anniversary screening of Kubrick's Dr. Strangelove on Friday at 7:00.  Details here.  Are there prizes for the best Peter Sellers or George C. Scott impersonations?

While the jokers of Loaded For Bear crack wise in the depths of LAC, some bands will croon pretty tunes upstairs on Saturday.

And the scenester event of the weekend is surely the LFK installment of the Dead Girls' three farewell shows. It's at the Replay on Saturday.  You'll miss these little scamps when they're gone, so don't miss this show.

Did you know that you can shorten your long links with AdFly and make $$$$$$ for every visit to your short urls.