Happy Valentine's Day From the LC!

The boys love Valentine's Day (or, as they often call it, "Chocolate and Fucking Day"). But sometimes it's hard to figure out where to take their best sorostitutes for a romantic evening. Luckily, it's a no-brainer this year. The new romantic comedy called Valentine's Day will surely rake in the cash at the box-office today (will it topple last week's tearjerker Dear John for the #1 spot?). The film stars nearly everyone in Hollywood and also marks the acting debut of pop superstar Taylor Swift ("Swift, especially, seems entirely undirected, as she jumps around, makes faces and jabbers on inanely." --Variety).

Let's see what other critics think.

"Haphazardly toss in 15 more subplots, half a dozen wacky canine-reaction shots, a wall-to-wall soundtrack of romantic golden oldies, and an adorable young moppet who just wants to have flowers delivered to the girl of his dreams, and you have a fluffy soufflé of shameless sentiment and sitcom wackiness executed with the kind of flailing desperation that’s generally accompanied by an overactive laugh track. Valentine’s Day looks like Marshall’s director’s magnum opus of pandering schlock."

Richard: "I love canine-reaction shots, where an event is so wacky that even a dog takes notice. And an audience laughs every time that this happens, every single time, as well they should."

As usual, the fanboys at AICN are skeptical of all romantic comedies, and this one in particular:

YackBacker says: "Lady YackYack and I will not be seeing this "film." This weekend, we're gonna bake cupcakes, mess around in bed and watch some DVDs when we tire of our "majestic friction." She wants to see THE FRIENDS OF EDDIE COYLE- she loves 70s cops & robbers movies."

And Tina Turner's Vicodin wonders about the continuing popularity of Julia Roberts: "How this swamp donkey is considered a star these days is a mystery. Strap a feed bag on that hose-hound and put that mutt out to pasture. Damn."

Do hipsters celebrate Valentine's Day? Sure, they do, so long as its made clear that they don't really believe in true love and fully understand the inherent artificiality of the "holiday." The best bet for V-Day hipsterism looks to be the TapRoom, which is hosting a "Valentine's Day Makeout/Grind Session with the Jet Set Bachelor / Iggybaby / Juiceboxxx." See the Juiceboxxx album cover below.

Chip: "This guy doesn't look capable of playing anything that would make me want to grind. And how can one grind to hipster music anyway?" 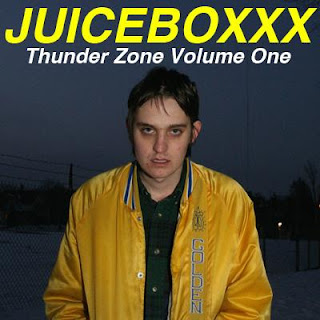 I won't be attending the TapRoom festivities tonight. However, I doubt it's a good place to go for some hot poon. I happen to know the artist JETSET Bachelor, and he won't be getting any poon tonight. Which makes him just another dime-a-dozen dude who won't be getting the downright dirty tonight. I would make another bacon strip comment but I fear it'd get edited for content...

Now, have we ever edited the Captain's remarks?

get that girl some rollerskates! said...