Foodie Pick of the Week: Downtown Larryville's Esquina Is Open!

As we all know, the greatest thing to happen in Larryville foodie culture in recent years was when Robert Krause opened the Burger Stand at Dempsey's, delighting foodies and hippies alike with his odd creations (the most recent special listed on the Burger Stand's Twitter page is this: "Black walnut dusted buffalo burger with blueberry-grape compote & goat cheese cream.")

Since the Stand opened, its fans have been asking themselves the same question: Could Krause possibly take a different everyday food and make it really weird?

Readers, it seems that the answer is a resounding "yes!" Krause's taco restaurant, Esquina, is now open in the former home of Round Corner Drugstore and, according to one local food blog (Jayhawk Girl's Kitchen), these tacos are indeed unusual (and absolutely delicious).

Let's take a look at the blog's commentary:

"There really are no words to explain my feelings about the pork tacos. Seriously, pork, pineapple and pumpkin seeds were made for each other!"

Chip: "Pineapple belongs on a taco in about the same way it belongs on a pizza, which is to say that it doesn't."

"Josh said that his favorite was the fish taco and I agree that it was pretty amazing with the fried plantains in there."

Chip: "Isn't a plantain like a banana? I don't want a banana taco."

Richard: "I've been hoping Krause would offer some sort of banana-burger at Dempsey's, perhaps with fried bananas and peanut butter as a tribute to the King, but no such luck yet."

Jayhawk Girl helpfully provides a photo of the menu (can't you offer us at least one good old-fashioned ground beef taco, Krause?), which we'll include below for you to peruse (click to enlarge). And check out Jayhawk Girl's food blog here: 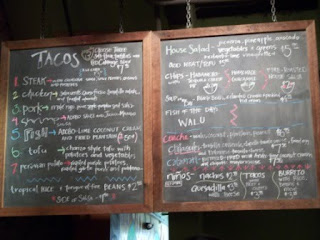 You can apparently get a beef taco on the children's menu.

And I'm ordering extra plantains on all my tacos!

I'm excited to spend 3 dollars more than I normally would on a meal for a gut-bomb and indigestion for dessert. Thanks, Bobby!

Hm. I wondered why I caught the whiff of tacos as I passed 8th and Vermont on my way home from church today. It was particularly pungent. I do not consider it a good sign that by merely standing downwind -- and a block away, no less -- I could smell this taco joint. But then again, I consider very little in Lawrence to be a good sign. I anticipate the inevitable art show at [whatever downtown gallery] of works "related to and inspired by the culinary achievements of Robert Krause."

Almost certainly at Wonder Fair Gallery. After all, it's right next door!

Chip: "Will this art be edible?"

When in fuck did people actually start taking this blog seriously as a place to discuss... crazy shit? Where in the blue fuck is Kip (and the Kip fuckers)?

Where are the adventures to the titty bars?!

does it matter? apparently, it shouldn't! said...

Is getting mad about some rando comment also the same as taking things too seriously around here?

Don't bother to reply -- no one cares anyway!!