Larryville's foremost hipster photographer A. Rusc.n has been missing in action for months, so it was a pleasant surprise to check in at Lawrence.com today and find a new photo spread. Rusc.n provides an invaluable service to the community, taking us into not just the heart of hipster territory but also to other, less hip, events where the boys themselves might fear to tread (such as Wilde's Chateau's Pride Night).

Let's check out two of them (click to enlarge), followed by interpretation: 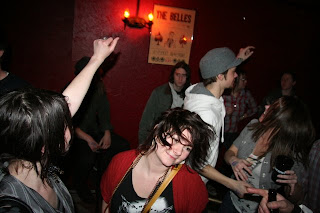 Richard: "Look beyond the swaying girl, who is no doubt hypnotized by the sounds of Lady Gaga, and you'll notice that the dancing fellow behind her is holding onto the finger of an off-stage figure, a detail that Rusc.n has cleverly included to illustrate the tenuous bonds that hold our culture together. The poster of the Belles looming over the scene is reminiscent of the eyes of Dr. TJ Eckleberg that hover over Fitzgerald's Gatsby, only here the flier represents the omniscience of local hipster culture which overshadows these inherently 'unhip' events such as NEON, as if to say, You can have your night on the dance floor, children, but soon this venue will be ours again, and we will stand silently listening to the Belles and exhibiting no visible signs of having fun whatsoever. 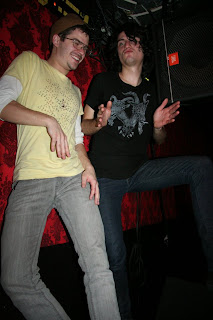 Captain Chanute: "Here we see a guy in a shirt with goats on it exaggerating about how long his cock is."

If it's Tuesday, you can bet that the world's geeks are already geeking out about tonight's new episode of Lost, "What Kate Saw," supposedly a "Kate-centric" episode (in the parlance of the show), which has led to many fanboy discussions of Kate's hotness and how much they'd like to bone her.

TheUmpireStrokesBach proposes an idea for a show of his own called "What I'd do to Kate": "The least mysterious episode yet. It involves a monster and a hatch covered with foliage. I'll be wearing the jumpsuit. Watch for it."

Chip: "If he means what I think he means, that the monster is his willy and the hatch is her vagina, this guy is hilarious."

Spud McSpud finds other female characters far preferable: "For my money, you'd want either Juliet (Elizabeth Mitchell) - badass, sexy as all hell, AND shagged Angelina Jolie in a shower in GIA, or Penny (Sonya Walger), also sexy as all hell, but has the added attraction of that posh totty accent."

Itchy says: "Hottest girl on Lost is Goth Claire followed closely by Kate. Seriously - even if I knew Kate would burn me alive as soon as I was done, I would still hit that ass. Just incredible."

Fain88, apparently uninterested in fucking, actually returns the talkback to important issues, such as the show's mysterious polar bears: "They were brought over by the Dharma Initiative (shown in the orientation video when mentioning animal research and the cages built at the Hydra station), and kept by the Others (Tom Friendly's comment to Sawyer about getting the fish biscuit) to test the Frozen Donkey Wheel (hence, Charlotte finding a polar bear in the Tunisian desert where Ben and Locke pop out after pushing the FDW)."

That Spud McSpud knows what he's talking about. Those are the two hottest gals on the show. Kate is hot, too, but I am surprised at the magnitude of her following.

Generally, anyone calling himself "Spud McSpud" is going to be pretty smart.