If you're anything like us, you probably rocked out with your glocks out (glockenspiels, that is) with Hidden Pictures on the Replay patio last night. And perhaps you donated some cash this weekend to the final film in the Harry Potter franchise, contributing to the highest-grossing opening weekend of all time (Chip: "Is it okay that I had a boner when Hermione disguised herself as Helena Bonham Carter?"). But perhaps many of us missed the biggest regional event of the past week: the opening of Trader Joe's in KC:

"As customers entered the stores, they were greeted by cheering and clapping employees who gave them high-fives and draped plastic leis over their shoulders. Some customers stopped to take photos with their cellphones or even handed strangers their cameras and posed in the perishables aisle as if they were visiting the Grand Canyon" (KC-Star).

As for us, we're a couple of Larryville rubes who have never yet experienced the joys of Trader Joe's, so we're not sure what we're missing. But we plan to make a pilgrimage this week and stock up on Two Buck Chuck. Is it sort of like the PBR of urban scenester wines? 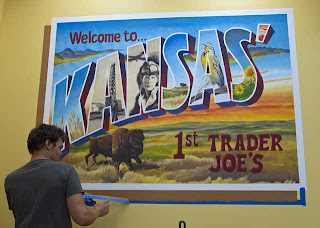 To get a feel for Day 3 of the Pitchfork Fest, we're turning to the Chicago Tribune for a few remarks:

"[Kurt Vile was] in the running for best rock-star hair of the weekend, his wind-aided mane getting an extra boost from an electric fan whirring at his feet. It’s like watching a Winger video from the ‘80s."

Who has the best rock star hair in Larryville? 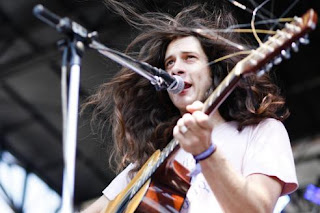 And here's the Tribune's take on Odd Future's controversial set:

"It all ends in a hail of profane chants directed at school, property and people in general – these are equal opportunity haters, if nothing else, and major wind-up artists. The more upset skeptics become, the louder and more extreme Odd Future becomes. Thousands thrust middle digits in the air, shout along, then disperse in orderly fashion as Odd Future leaves the stage."

Classic scenester audience. Their supposed disdain for authority ends as soon as the music stops and then it's right back to apathy.

We know that at least a few of our readers were on the scene this weekend and, as always, we'd love to have guest columns, scenester photos, etc (if you're not too apathetic to help us out).
Posted by Nog at 6:23 AM