While Larryville's apathetic scenester culture slept away a PBR hangover this morning, a few hundred local progressives took a break from the Farmer's Market to rally against the SRS closure in South Park.

As was the case on Monday night, Plymouth's Rev. Dr. Luckey kicked off the rally with a stirring vow to fight until SRS re-opened. He even tossed in a tenuous (but always crowd-pleasing) attempt to link the Brownback administration to Larryville's greatest historical villain: William Quantrill.

A bit later, Kansas Poet Laureate Caryn Mirriam-Goldberg rallied us with a poem.

Chip: "If I've said it once, I've said it...several times. Nothing gets shit accomplished quicker than poetry."

And the rally ended with Democratic State Senator Tom Holland leading a band in a rousing version of "This Land is Your Land" (the obvious closer for any good rally) while local "consumers" of SRS arrayed themselves in front of the gazebo. We were inspired. So inspired, in fact, that we thought of getting on stage to recite Harper's beautiful monologue from the end of Angels in America (this being Tony Kushner's birthday and all, which we know because we are literary geeks):

"Nothing's lost forever. In this world, there is a kind of painful progress. Longing for what we've left behind, and dreaming ahead. At least I think that's so." 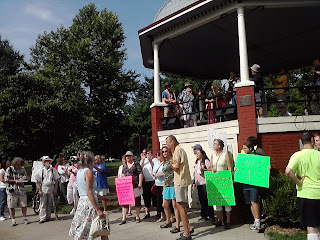 As we hoped, there were plenty of good signs on the scene for the rally.

These ladies were pleased to pose for us with this sign referencing Sedliecki's comments that deciding which SRS offices to close is like sacrificing a child. 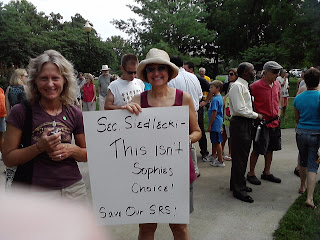 Did you know "Brownbackistan" has its own Urban Dictionary page ? 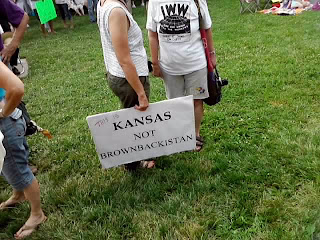 These Unitarians showed up a little late, but they were "standing on the side of love." 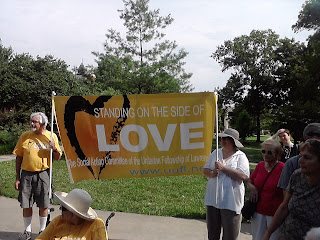 And we're pretty sure these signs are not meant to be read together. 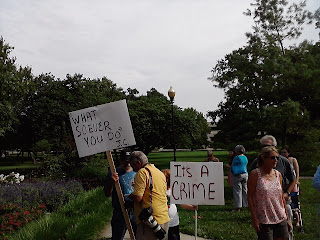 ---
We're far too lazy to travel to the Pitchfork Festival (though we streamed the GBV set yesterday while shotgunning a few PBRs). So we have to turn to the blogosphere for the inside scoop. Here's a description of James Blake's set from The Music Slut:

"...during moments of silence, when nearby Neko Case’s performance would leak in, you could hear people instinctively “shhhhhh” her."

Richard: "Anybody that shushes Neko Case is a dick."

Chip: "I enjoy James Blake. Especially that 'You're Beautiful' song."

Richard: "You're thinking of James Blunt."