It's a scorching Sunday in Larryville with heat advisories issued, so the scenester population will of course head out in the hottest part of the afternoon to drink beer and play a children's game. We predict a record number of scenesters will puke from the PBR/heat combination until the Game of the Week resembles the pie-eating contest from Stand By Me.

From what we gathered at Coach Cyrus's blog, it sounds like we missed a rousing Fourth of July kickball weekend last Sunday including:

"the greatest upset in KVKL Game of the Week history"


"A good chunk of the Chalmersiz showed up in a party bus that was filled with fans, fireworks, and a screen printing set-up."

"I was busy waving an American flag for a good chunk of the game, and was pretty intoxicated by the end, so someone who was closer to the action please step in and write about this one."

And on the official KVKL blog, we discovered this bit of info:

"As many of you probably heard, the police were called to Edgewood on Sunday. The complaint was due to urination on someone’s property, but the officer also discussed noise and open containers. As we understand it, this was one of multiple complaints they have received this season. Since it seems that some do not want us there, Kaw Valley Kickball has decided to discontinue our use of Edgewood until further notice...Please avoid urinating in yards, keep the volume low on your boombox, pick up your trash and cigarette butts, drive the speed limit, and don’t flaunt your beverages."

Richard: "Public urination and the flaunting of beverages are easily the best parts of kickball. What next: will townies start asking the scenesters not to streak?"

Chip: "I attend every week solely in hopes of seeing female streakers, but they are so rare. Why aren't there more of them? And why aren't there pictures of the ones that do exist?

In tonight's Game of the Week, Free State Brewery takes on the Replay Rowdies, followed by the usual Replay party. Our Twitter-buddy Duckie says she's hosting karaoke inside at Replay tonight, although L.com says there's a drum-and-ukulele duo in there along with Whiskey Dick, and the Replay lists a band called Me Like Bees (cute name) instead of Whiskey Dick. Your guess is as good as ours. We'll be home watching the new season of Curb.

Whenever there's a major local story (and, make no mistake about it, the Brownback administration's closing of the Larryville SRS offices is a major story), we like to check in with the outraged liberals, the rightwing nutjobs, and the crackpot Eastside conspiracy theorists who hold court over in the LJ-World talkback section.

Here's a sampling of commentary about yesterday's public meeting at the Lawrence Public Library to discuss the closing:


shovelready wonders if the LJ-World's headcount of 150 people at the meeting is accurate: "If that's even accurate to any degree, seems the paper and it's forum and it's leftist managers have given a pretty big megaphone to this issue. The head count doesn't support the hysteria that LJW has fomented."

Alceste, as usual, says something we only partially comprehend: "Where were the poverty pimp professionals from Kaw Valley, The Farm, dccca, casa, etc.?"

Cait48 links Brownback to the Taliban (sort of): "This man wants to create a theocratic Talibanesque "Christian" empire and he can't even figure out if he's Sunni, Shi'ite or Sufi."

And our favorite, Swan_Diver, says we need action, not meetings: "...if the freak is actually occupying this publicly-owned residence [Governor's Mansion] Keep 75-100 raucous egg-hurling demonstrators at the gates on a 24-7 basis, or simply storm the barricades. TV crews will be numerous. You got to make these criminals feel the pain, before they'll change their behavior. The rest of it is just talk."

Richard: "It's what I've been saying all along. Nothing's been done that a little egg-hurling can't fix."

Here's a photo of Brownback showing how many jobs he's saved during his term. But how many has he cut? Also, we hear that the military dude's job is too shoot anything that looks like art, and ask questions later.

If you're like us, you were very disappointed that Liberty Hall (and the Tiv and the Glenwood Arts and the Rio and the Leawood) never offered us a chance to see Apichatpong Weerasethakul's widely-acclaimed, Palm d'Or-winning film Uncle Boonmee Who Can Recall His Past Lives. Luckily, it's on DVD this week, so we'll be hosting a viewing party.

"...if you're not easily hooked by a talking catfish getting it on with a princess. Apichatpong, helpfully known as Joe, ­infuses his dreamlike films with references to nature, animals, memory, reincarnation, spiritualism and eroticism."

We're TOTALLY hooked by a "talking catfish getting it on with a princess," and the latter comments suggest this would make a good double-bill with Malick's Tree of Life for those who want to join us in an all-day art film spree. 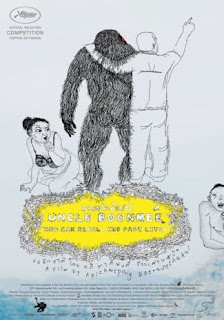 of how many blow jobs brownback will be giving