Bananasuit Offers a Powerful Feminist Defense of #KUBoobs / Plus, Some More KU Boobs

Readers, it's Championship Day and, if you're like us, you are drunk. Rock Chalk!

But, as you wait for the game to begin, allow us to entertain you with a feminist manifesto.

So here it is, courtesy of @bananasuit . We think it's absolutely terrific:


Mardi Gras, Carnivale, Girls Gone Wild -- it's a familiar trope: the disenfranchised female who degrades herself by committing sexually depraved acts in order to achieve favor with a privileged class of men who want to do her.

We often interpret these acts as a surrender to the male gaze; a tacit agreement between male and female that he is the subject of a sexual fantasy in which she has been relegated to the role of the object. But #kuboobs is totally feminist.

Readers, I offer you a Paglian reading of the #kuboobs phenomenon. More gutsy and way less boring than her mustachioed first-wave foremothers, feminist Camille Paglia has argued that females have an inherent sexual mystique that we can exploit to appropriate power for ourselves. She reclaims female sexuality and makes boobs possible again for feminists. It's why Lil Kim can rap about her pussy and still be Queen Bee; why Parker Posey can be styled as a modern sexy librarian and still be a feminist icon; why Nicki Minaj can rock the platinum Barbie look and still own it, girl.

It's all about who's in the driver's seat; and in the case of #kuboobs, it's the ladies all the way. #kuboobs has emerged from the throes of March Madness: a frenzied, cultish worship of the male body and its physical prowess. Its a masculine sphere that traditionally excludes women (just like those pricks who assume girls don't watch the games!). But with #kuboobs, ladies are here to announce their fandom, loud and proud, and to seize their own place among the Apollonian body worship that's synonymous with the NCAA basketball tournament. Its our answer to the phallic act of putting the ball in the hole. We women are reappropriating power from male athletes, bracketeers and sportscasters, and announcing: "we're here, we're powerful, and we can hijack your twitter feed with our boobs."

The most exciting thing about #kuboobs, for me, is the inversion of the classic feminist critique that women's bodies are constantly at risk of being transformed into objects of desire to be consumed by the male gaze. And although the #kuboobs ladies are curiously disembodied and decapitated, with no gaze of their own to turn towards the camera lens, the difference here is that ladies are transgressing this social boundary not out of coercion, but because they want to. We're doing it because we can, and because no one can tell us not to. It's because now we understand that women can be sexual and still be powerful. Witness the roller-derby girls and hip-hop divas, pageant queens and sexy librarians. It's the new feminism. And I think I like it.


However, @bananasuit did not attach a #kuboobs shot of her own to this report (what do we make of this omission?). [Update: B-Suit is now part of the phenomenon via Twitter...Kudos to her!!]. And we naturally couldn't print the piece without another visual illustration. So we turn again to @christinamaki for this new shot that not only showcases her boobs but also gives Francis Sporting Goods a little local love! And you can also go here for a full compilation of #kuboobs shots, but be warned (and/or titillated): some of the boobs are bare. 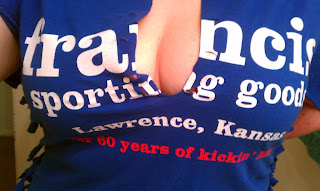 I'm a male, I consider myself a feminist and I love breasts.

to say this is "empowering" or "part of a feminist movement" is stupid and silly and demeans those terms.

comparing ladies showing off their cleavage to admiring males for their bodies' abilities in a sport is a terrible comparison and very belittling to women. "men can excel on the field of sport. the female equivalent? show us your boobies!"

I wonder how the flat chested college women can show their pride?

As a gay man, I can pick a fake feminist a mile away. Go away, sweetheart. Keep your boobs covered. Using them to get free drinks is a form of prostitution.