New Interview: We Dig Deep Into Doo Wop With Dean Monkey and the Dropouts

Doo-wop may not be widely represented in the local scene, but the pranksters in Dean Monkey and the Dropouts are keeping the faith. Today we're chatting with one of the Dropouts, Max, about doo-wop tradition, quarter chubs, and underwear-parties in a hole in the ground out near the train station. You can catch Dean Monkey and the Dropouts this Friday the 13th at Love Garden (some hep cats are reading poetry at 8 and the Bloodbirds and Dean Monkey follow around 9). We're told that homemade beer will be on hand! They'll also be at the Replay opening for North America on April 19th.

Check out Dean Monkey on Soundcloud here and on Facebook here .


Richard: The first time we took note of Dean Monkey and the Dropouts was a video of you guys performing in your underwear in a hole in the ground somewhere out by the train station. How did that gig come about, and are there still shows being played in “The Church of Malt Liquor?”

Max: We (being the Dropouts and that mysterious entity known as Dean Monkey) were spawned in the sewers of Lawrence and raised by our interstellar messianic guru known to human beings as Agent X-12. So as you can imagine The Church of Malt Liquor show was a homecoming of sorts. Ironically enough however, our legendary origins had little to do with how that particular gig came about. Quite simply, years after coming to the surface we met the Pizza Power boys and instantly bonded on our shared interests of pizza, strange music and hole parties. The only other show to take place at this illustrious location that I am aware of was when the Faggot Police brought some sort of generator down there, surely disrupting or inspiring many copulating animals and humans in the area. I would like to go on record and say we were the first and those “Fag Cops” ripped us off! But…that’s okay because they’re hot dudes with lovely boners and they’re welcome to open our treasure chests anytime, winky face. Surely there will be more shows down there this summer but it is a mysterious place and the general spirit of it is contrary to long term planning.

Chip: Did anyone get a boner during that underwear party?

Max: No one had a full-on but we are always rocking quarter chubs. According to a representative for the female faction of our band “The girls were as wet as the sewers below”.

Richard: We love when “square” things become hip again, so we’re hoping you all spark some kind of doo-wop renaissance. What drew you to that genre? Are you guys total doo-wop scholars? If so, tell our readers a few bands they should get to know.

Max: I think what drew me to the genre was its beautiful simplicity paired with its inherit silliness. Some of the same things that I love about doo wop (men singing insanely high falsettos, the extreme sincerity concerning mostly superficial matters) are the same things that I find humorous about the genre. There is also an underlying sexual dirtiness (which is our bread and butter if you couldn’t tell already) to many of the songs in varying levels of subtlety. (For an example of a song that is not so subtle check out “No Cherry” by the Turbans. There is also a fantastically lude a capella song from the same era entitled “Cocksucker’s Ball”) [Listen here ] However, the general idea for “dirty doo wop” came from the master of the genre, Frank Zappa, who has some wonderfully raunchy doo wop tunes in his repertoire. The theatrical-ness of the genre also appeals to us as people who want to put on a very entertaining show. I think a good example of dramatic flourish within doo wop would be something like Little Joe Cook and the Thriller’s “The Echoes Keep Calling Me”. [Listen here ] . Simply vocally this song involves some of the best (and silliest) falsetto I have ever heard and Joe Cook’s penchant for rolling his Rs in a dramatic fashion is simultaneously absurd and astoundingly creative. Anyways, to answer your question I have become more of a doo wop scholar (though certainly an amateur) as we have been developing this band but the idea for the band came before I knew much about the genre at all. I was simply attracted to the melodies, the simplicity and effectiveness of the rhythms and instrumentation and the capability it had to entertain. I’ve been in bands before where people just stand and don’t seem to react to the music at all. With this band we beg for reaction and usually we get people dancing and hooting and hollering which to me defines what a good show should be.

Richard: You guys are certainly prone to on-stage antics and costumes. Tell us about a few of your most memorable gigs.

Max: At one of our early gigs we donned full ICP makeup. I think most people enjoyed the absurdity and irony of a band singing doo wop songs masquerading as a white trash “shock” rap group. However, one particular blogger wrote (in what was our first review) of the horror they experienced as their worst nightmare was played out in front of them. We took this as a badge of pride and have since made peace with this person. We like to keep our fans on their toes. You never know when you might show up to one of our concerts and we’ll be dressed as your secret terror!

Another great show was the aforementioned Church of Malt Liquor show where throughout the performance we slowly stripped into our underwear (removing one layer after each song). The reaction can only be described as an anti reaction. There were no “woos”, cat calls or even the slightest recognition of the events unfolding. We had a great time and the awkwardness suited the occasion but it was a bit unnerving that nobody seemed to care much that they were watching a nearly naked band perform doo wop in a hole down in the woods.

Recently we performed before techno rock superstars “Yacht” (dressed as cowboys/girls) to a group of mostly nonplussed 19 year olds (though I think we made a few fans). To fit the cowboy theme we had the idea to tell jokes from the TV show, “Hee Haw” between songs, which was received with confusion and ambivalence. It was great!

Richard: How do you think Pitchfork would describe your band and what rating might they bestow on you using their 0.0 to 10.0 scale?

Max: First of all I would like to say that a member of our band (who shall remain nameless to protect their indie hipster cred) responded to this question with all sincerity “what’s pitchfork?”. To be fair this person stayed back in the sewer for a few more years than the rest of us and has had trouble acclimating to above ground culture. It is difficult to imagine we would fair well when put through the Pitchfork gauntlet. If I was to venture a guess concerning the numerical score I would say higher than 2.3 but lower than 5.2. They would deride us for our unashamed nostalgia and simultaneously scoff at our “juvenile lyrics”. We were talking among the band about Pitchfork’s habit of picking bands from obscurity just to talk about how terrible they are (which seems unjustifiably cruel but still there is an allure to just be featured on a well known internet publication). As one Dropout so deftly put it “We’re into S&M so we’d love for them to drag us out of the darkness just so they can shit on us”. Amen.

Chip: My favorite song of yours has got to be “Fucking Broke and Blue Balls,” because it’s just so relatable. What’s your personal favorite song and/or favorite lyric that you’ve written?

Max: Actually “Fucking Broke” and “Blue Balls” are two separate songs but it’s an understandable mistake as they are listed together in the Church of Malt Liquor videos. However, this has given me an idea to combine the two songs as they both are about being deprived of something…hmm..

Anyways, we have a lot of favorite lyrics but the ones most enjoyable without the context of the song are the ones concerning dirty dirty sex.

“Baby my hearts blue and so are my balls”(from Blue Balls) I thought was pretty brilliant when we came up with it. Mostly I was confounded that it hadn’t been used yet, seems pretty obvious.

“Fountains of love sweetly sprayed across your bed”

“Cover your eyes and open your…heart”

Richard: What can we expect from your upcoming Love Garden and Replay shows and what else is on the horizon for Dean Monkey and the Dropouts in 2012?

A show where we’re all on horseback

Fistfights hopefully (If you were at the Baby Birds show at the replay the other night you know there was an amazing street brawl, everybody inside was glued to the windows watching it anyways so why not bring it inside for a UFC style fight in front of the stage?) 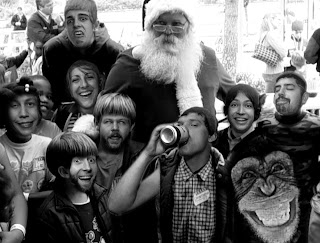