Recent Adventures / Plus, the LC Checks In With LJ-World's "Lifestyle Magazine" To Look At Pictures of Famous Local Animals!

Richard knew it was going to be a special evening at the Replay when KC's Them Damned Young Livers took the stage with a set-list written on the back of a PBR box and proceeded to deliver a reckless set that mostly consisted of the lead singer tackling his bandmates, knocking shit over, and generally frightening the normally family-friendly Sunday night crowd with statement's such as "This song's about anal sex!" Actually, most families on this evening had already figured out, with a single peek in the door, that a roomful of heavily-tattoed hardcore leather-wearing old-school greasers and hepcats probably wasn't the best place for their children and that they'd be better off waiting till a weekend when the Midday Ramblers were playing.

But what was it that attracted this rarely-seen subculture of serious rockabilly/punkabilly/psychobilly fans? It was not the Livers, but rather the headliner, Three Bad Jacks, all the way from California and rumored to have some connection with the Ramones, a band that took the stage promising to play "faster than you've ever heard before" and then literally set the place on fire. Here's a look: 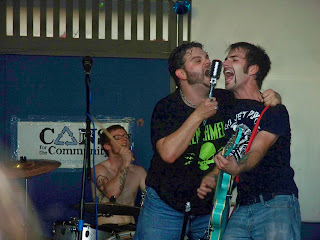 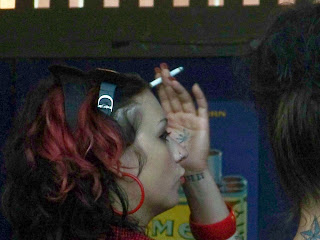 And here is a stage-fire set by Three Bad Jacks. Why don't more acts light fires during their performances? (come on, Cl.thier! wouldn't it liven up that James' song a bit..."This bed is on fire / with passionate love!"). 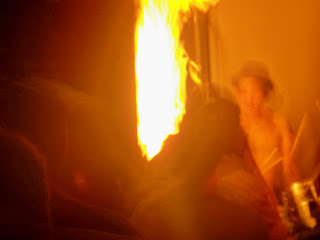 It's been a long time since we checked in with the LJ-World's weekly "lifestyle magazine" called Go, but they certainly continue to do fine work. This week's cover story is called "Window Shoppers: Meet Some of Downtown Lawrence's Most Beloved Pets," and it's especially fascinating in case you've ever wanted to know more about that lazy-ass dog at Kring's Interiors (his favorite spot is by the candy machine!) or those three wacky Love Garden kitties ("they have epic wrestling matches every night").

This is Love Garden's Mickey Roy: 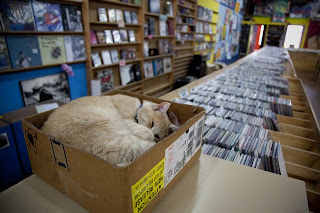 Chip: "Don't let this cute picture fool you. These fuckers are trained to scratch your eyes out if you attempt to purchase anything less than 'hip.' I still have three stitches from when I tried to buy some John Mayer on vinyl."
Posted by Nog at 10:33 AM

matt clothier and the mavens of cool said...

Therefore, my vote goes to Draco and the Malfoys.

What about our very Lawrence-friendly song about the evil white empire builder robbing the land from peaceful, noble indigenous peoples, "Beds Are Burning"? Surely this is a more fire-inducing song than a tune about some girl who can only get orgams by riding cowgirl on some bloke. Or perhaps it's reverse cowgirl. I love when the birds mount me like that. What a view...especially when they lean forward. Oh, who am I kidding, songs about sex are much better with fire than polemicals about colonialism and racism! Burn stage, burn!

How about "Matt Cl.thier and the Reverse Cowgirls."

But wouldn't that make Emily...?

And according to her, they love this shit!

Is there going to be any more Harry stories on here?

Because this is stupid.

the editorial board said...

Thanks for the helpful criticism.

Be more constructive with your feedback, please.

Notice the mysterious space between the "y" and the "ou" in the anonymous post.

This could well be the work of Dr. Y, that bastard!

I thought it was a combination of Spanish, French, and English, and that the actual translation was, "And yes people are stupid," but Dr. Holmes' theory is intriguing as well!

I regret to inform you that I have not, aside from this very moment, addressed the swarthy rabble of this column of my own volition. My work, here, aids and assists Dr. X's fumbled... often profane, musings while he is away on tribal business.

At least that is what he calls it.

Regardless, whomsoever has taken liberties with my name or title will have the most fullest extent of the laws of this great nation unfurled upon him and/ or her with zeal, haste and brute force if necessary. I assure you that my day has not the time enough within it to kow-tow to such accusations; nor shall I suffer them.

Good day to you all,