Readers, "happy hours" have been banned in Kansas since 1985, but due to new legislation that takes effect today, we can once again enjoy cheap drink specials at designated times like civilized people!

Oddly enough, we've heard almost no buzz from local boozing establishments about plans for "happy hours."  You'd think they would have turned today into a major occasion?  It's a disappointment, for sure, but presumably happy hour specials will soon start popping up around town to help us all get fucked up, cheaper, at earlier hours.

We began our weekend with Final Friday events at Wonder Fair and The Invisible Hand.

Sean Starwars' "A Fuck Ton of Prints" show at Wonder Fair was pretty terrific.  Especially the stuff about Star Wars.

This was our favorite: 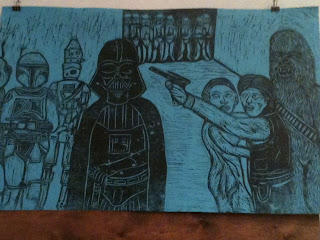 But this one, combining Star Wars and Pac Man, is also damn nice: 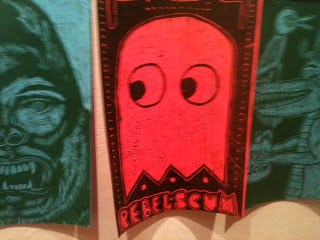 Next door at The Invisible Hand, we found ourselves inspired by some anti-Brownback art (Chip: "The flames symbolize his evilness.").

And we're fans of work that has all kinds of weird shit stuck to it, so we studied this piece for quite some time: 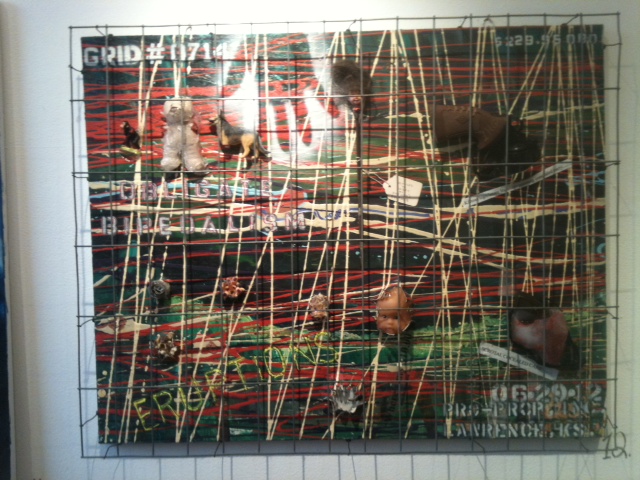 On Saturday we attended our first "Pass the Hat" event at the Percolator to catch our buddies in The Leotards.  They're rocking some great new material these days, including a song about how they want to fuck your mother, tonight!   You can catch them again on Thursday, July 5th at the Replay, opening for Droids Attack (is that yet another Star Wars reference!?).   How will the 'Tards drum machine and penchant for rap covers mesh with the "underground metal" of Droids Attack?  Show up and find out.  (but it's too bad The Leotards aren't on the bill with Drag the River and a band featuring a dude from The Descendants, who are playing across the street at the same time at that bar that used to be hip).

Here's The Leotards, with Stix in mid-howl:

Our final stop was the Replay, naturally, where Truckstop Honeymoon was headlining the 3rd Annual Fish Fry (there may have been actual fish fried there earlier in the day, but we certainly saw no evidence of such a thing, though someone had left a nice fruit plate full of blueberries on the table we occupied).  It was so hot that Truckstop cut down on their between-song joke-telling and the only person brave enough to dance was the guy pictured below, who kept up his solo dancing for an admirably long time while his Keep Lawrence Weird shirt got very sweaty indeed.   The sound outside was absolutely top-notch, however  (good job, Adam Hess!).