The Transmittens Need Your Vote! / The LC Sells Out!

Readers, it's the time of the year to cast your ballots for the annual PitchWeekly Music Awards, and we want to take some time today to offer a few of our personal picks.

First, we are DELIGHTED to see Transmittens get a nomination in the "best pop" category (although its too bad "twee" isn't yet locally popular enough to warrant its own category). What would summer be like without "Meet Me At the Swings" and "Balloons in the Sky" on endless repeat? We don't know...and we don't want to know.

The "indie rock" category features some of the toughest match-ups. Obviously, Rooftop Vigilantes have garnered the most national buzz of late, and we'd probably vote for them if they weren't too hip to "follow" us on Twitter. Since they are, we're going instead with Noise FM, who DO follow us on Twitter and also because they are from Forttt Scottt and old friends of Chip. InkKC says their new EP, Enclave, "contains catchy hooks, clean riffs, and easy-to-digest vocal and lyrical content, all accessible to a casual, mainstream listener."

Chip: "In Forttt Scottt we like our riffs clean and our hooks catchy. When we hear a song like the Vigilantes' 'Seth No Jump,' to be honest, it scares the fuck out of us!"

Finally, in the "Emerging Act" category, we're solid supporters of Mammoth Life, primarily because we're suckers for a band that wears snazzy uniforms: 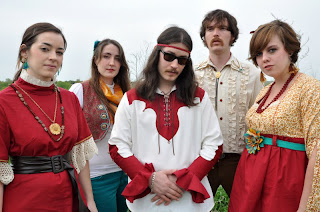 Just as hipsters turn against their favorite bands at the first signs of increased popularity, so too has the recent fame of the LC (and by fame we mean four new readers) begun to create a backlash. Let's look at some of our "hate mail" from the comments section.

I'm With Chip says: "What the fuck is this shit? *sigh* This is going to turn into a fucking commune. I'm bringing the pipe swingers. The purge must begin!"

And this one is our favorite (hilarious! does it belong to Cl.thier?):

How Dare He?! says: "I can tell Richard has already changed...notice Chip was completely absent from this (boner joke-free) post? And Richard mentions Esquina with nary a smart-ass comment about pork butt tacos with squash and granny smith apple slaw! Sellout. Goodbye, Harry Lupus."

Richard: "Truly, it was an oversight on my part not to toss in an Esquina joke, but let me make up for it by promoting the delicious 'rabbit dog' at the new Burger Stand. Yes, it's a hot dog, but with rabbit meat. As soon as 715 started selling rabbit, a foodie bandwagon began. Within weeks, we predict it's going to be hard NOT to eat a fucking rabbit for lunch around here. Now, as for the blog selling out by expanding our readership, well, there may be some truth in that. But in return it means that Anna Undercover now follows us on Twitter. Will she offer us a discounted lapdance for all the free publicity the LC has given to her blog? Let's hope so."
Posted by Nog at 7:59 AM

So now that you're a twitter sweetheart, does it mean that bands (or other groups) have to follow you on twitter to get a LC endorsement? Isn't that something akin to a group giving a campaign contribution and all the perks that certainly follow....

I love you more than yesterday said...

Although I'm still anti-Twit, the LC retains its quality.

Holding bands hostage, I assume, is merely shtick, and you really wanted to endorse Noise FM all along.

And although boner jokes are pervasive, it's not bad to put them on the shelf for an episode or two. It just makes them funnier when they pop out again.

This is a kind reproach said...

Who are you quasi-analytical, hipsters shits who are fucking up our jazz with Fuckpony over here and jig-fat-ass donkey Kipton? We do fucking boner jokes, cover Clithier making the scissor sisters wet when he croons and write fucking Harry Lupus.

This transmitttens bullshit somehow got passed the fucking fat-lazy-shit bitches radar, but that shit is done. From now on, we're coming down, clusterfuck style, ready to shit your fuck up!

I've given one free lap dance, ever. It was to a soldier about to leave for Iraq.

(FTR: I might have repeated this on a separate occasion, but I can't recall if we ended up just chatting instead).

So... Thanks for liking my foot, and if I wasn't so entranced by the sound of my own voice, I'd thank you for the free publicity, too.

Maybe we'll do coffee some time if we don't freak each other out in the process of getting acquainted.

Note to self: beat living shit out of junk collecting reefer heads. And then grab a sodie and watch fine ass woman do her thing.

Anna's comment just made our years of unrecognized blog-writing worthwhile! If we have coffee with you, our heads will truly explode (but we'll give it a shot anyway).

Thanks for not suing us for the foot picture and any of our other shenanigans!

But thanks for your critique!

It's a blog about hipsters...everything has to be "so-called" - that's what being a hipster is all about - the inability to do anything genuinely. Look what you've caused, postmodernism.

And while I usually have no idea what the hell Dr. X is saying, I must agree with him on that bit about "Clithier" and "scissor sisters".

Yes, if I had to level one criticism at this blog, it's that there's an almost total lack of explicit photos of lesbian scissor-sex. Otherwise, keep at it, gents!

I come for the mediocrity.

stuck in the middle said...

You should go to Lawrence.com for that, Sam.