We stopped by the LAC on Friday where hometown heroes Cowboy Indian Bear celebrated the end of their tour with an album release party featuring a massive sound (a 9-piece band that amped up the harmonies and percussion) and an epic backdrop of kick ass projections (why can't more bands perform shows with nature footage in the background?). 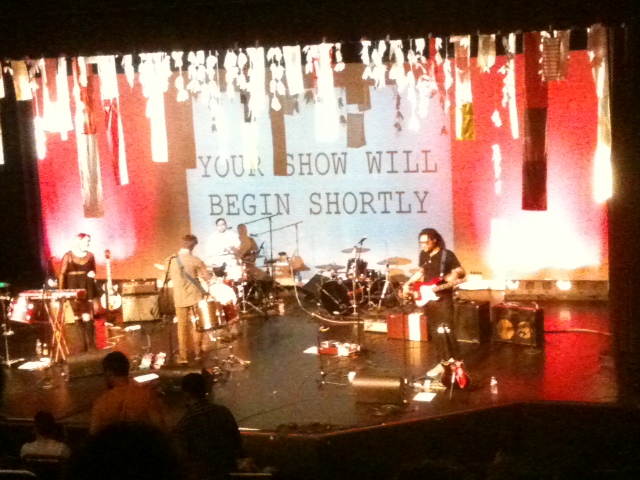 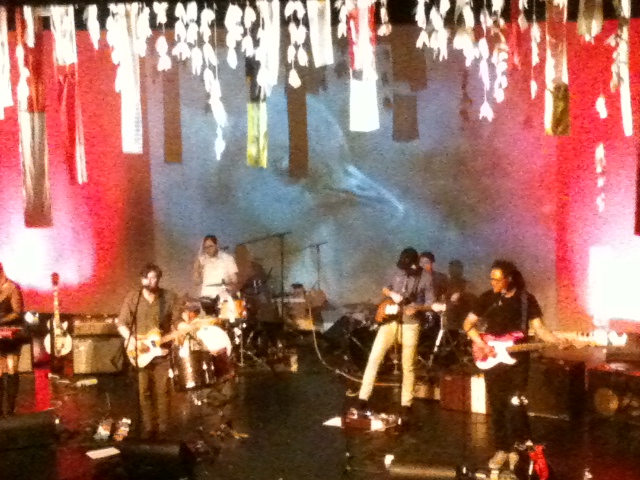 Larryville's "Give Take Give" project, a chronicle of the treasures found in LFK's most beloved dumpster, culminated Saturday in a "show and tell" event in which locals told stories about their favorite discoveries.  Our favorite of the stories involved a dumpster full of 70s-to-90s era Playboys.

Chip:  "That's great, but a dumpster full of Hustlers would have been even better. Of course, no one is stupid enough to toss out their Hustlers."

Make sure to pick up the free 60-page Give Take Give book which is full of powerful photos and testimonies.

Photos:  project mastermind Dave Loewenstein and the dumpster-art backdrop of the evening. 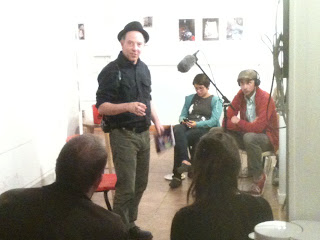 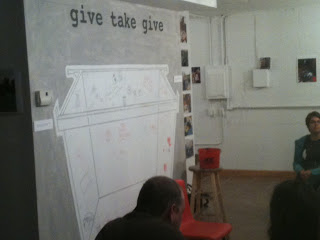 Sunday brought the most pleasant weather LFK has experienced since at least November of 2012, and hippies packed the Replay patio for Truckstop Honeymoon's Mother's Day show.  A recent highlight of Truckstop shows has been the woman who joins the band for a few songs to provide sign language and interpretive dancing.  She's a treat! 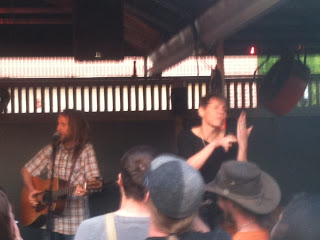 American Craft Beer week kicks off today and we'll be putting aside our PBR at least long enough to sample the yearly collaborative brew between Free State, 23rd Street, and Top City's Blind Tiger.  This year's brew is called Smoke on the Wheat.   Here's a great description from a recent LJ-World piece :

"Light as straw and crisp as Perrier but with a roguish smoky overtone — and as 23rd Street head brewer Bryan “Bucky” Buckingham notes, a little baloney on the nose (...or maybe it sounds better to say charcuterie?) — Smoke on the Wheat is in the style of a 14th century Polish Grätzer ale."

Did he just say this beer smells like baloney?  We WANT this!   See you on Free State patio this evening if they haven't run out by then (we can't figure out the tapping-times so far).

During this morning's LFK-research, we stumbled across a new literary group called Naked River Readings, whose members will be offering up some "rants against humanity" and "slightly disturbing essays" at Frank's North Star tonight.   Let's go and see if they're really naked.  Give them a "like" on FB here .

On Tuesday, hippies will gather at the Lawrence Arts Center for the weekly Tuesday Concert. This week showcases our friends Tasha Haas and the Silos (we like to call them the "Sly Hos").  They'll be playing some "cowgirl-inspired folk rock" and it starts at 7:30.  Visit the Tuesday Concert site here .  Sadly, no beer is served at these events, but you can probably take a toke with them in the alley before the show (they refer to the alley as "the green room").   Note:  Tasha's band also contains a flautist and someone who refers to himself as King Tosser. 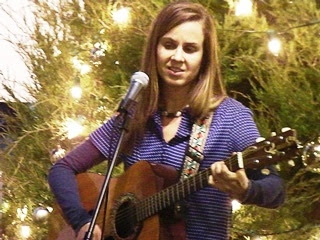