Buran Theatre, now based in Brooklyn, returned to their old stomping grounds of LFK/KU this weekend and delivered their patented weirdness to a respectable crowd of adventurous souls who apparently prefer spending their holiday weekends watching avant-garde theatre than going to the lake.

We had seen a previous incarnation of Nightmares: An Artful Demonstration of the Sublime, in 2008 at the Lawrence Arts Center, at which time (as we remember) it was mostly about a couple who had purchased a painting (or a fascimile of a painting) by Henry Fuseli called The Nightmare.  And this couple spent A LOT of time having sex.  And there was an overflow of very-meta narration including one point where the narrator says, "This time let's just sit back and watch them fuck," followed by another long bout of full-frontal simulated sex (Chip: "This was the single best moment I've ever experienced in the theatre: both a trenchant commentary on the voyeuristic power of the stage AND a chance to watch naked people pretending to bone.").

Buran's current touring production of Nightmares strips away much of the original narrative (and, sadly, all of the simulated-sex) but many of the original elements--the couple and the painting and the meta-narrator-- are still intact, leaving audiences with a wild fragmented rumination on "authorial intention," the power of the imagination (or maybe the dwindling of the power of the imagination in the modern world), and the "anxiety of influence" (as Bloom would term it) embedded in and around a series of unhinged set-pieces and songs which include:

--a naked woman climbing a wall.

--a delightful song-and-dance routine from Frankenstein's monster, a "vampyre," and a mummy.

--a scantily-clad woman who (on the night we attended) leapfrogged three rows up into the Black Box bleachers to try to pull our friend Peter on the stage while screaming "I'll suck your cock clean!"

Clocking in at less than 90 minutes with no intermission (super-short by Buran standards), Nightmares was undoubtedly the best bang for the buck (the cost: pay whatever you want) to grace local stages this year.

Our favorite line from the narrator (and it should be said that Jud Knudson is kind of fucking amazing in this role and in his fearless give-and-take with the audience before the show technically begins):  "In about 20 minutes a monster will appear on this stage.  But don't be worried.  Well, be a little worried."  It's a perfect evocation of "the sublime" (and it creepily brought to our minds the invocation of the "monster in the alley" in Lynch's Mulholland Drive).

Sexiest moment:  a nearly-naked woman delivering a long monologue about the intimacy of cellphones.

Kudos to Adam Burnett and Jud Knudson and Buran for bringing a little danger and risk back to local stages for the weekend.  You won't be seeing anything like this out at the swanky new Theatre Lawrence in West LFK, folks.

"Eventually, everyone is clad in underwear and turtlenecks (that signifier of pretension and illness), otherwise, the casting and costuming (tasks left uncredited in the program) seemed to evince some heteromasculine fantasy with the eroticization of bodies skewing heavily to the corseted or naked female performers."

Horror Remix is back at the Bottleneck with a presentation called Don't, featuring "2 hours of horror films from the 70's and 80's that have the word 'don't' in the title."

As we all know, the definitive (one-minute) statement on such films has already been issued by Edgar Wright's ever-hilarious Grindhouse trailer for the faux-film Don't.  Watch it below:

In keeping with today's nightmarish themes, we'd be remiss if we didn't mention that LFK's own Chad Thomas Johnson has a new book out today called Nightmarriage. Here's a blurb (find full details and ordering instructions at Chad's site here) :

"Nightmarriage is a whimsical memoir that explores the terrors of marriage and the perils of parenthood. Adapted from Johnston’s blog series of the same name..."

Oh, readers, just wait till we adapt OUR blog into a book within the next few years! We'll certainly be tasking BARRR with the cover art (boner pictures).

Naturally, BARRR is a collaborator on the artwork within Nightmarriage as well, along with other local(ish) luminaries such as Danny Joe Gibson and Dan Billen.  Check out a lot of the artwork (including some that wasn't ultimately included) at Chad's Pinterest page here .

Sidenote:  we still cherish the LarryvilleLife Twitter logo featuring Chip puking up a bunch of PBR cans that Chad once designed for us and put on a giant mug.  We drink from it each day as we write these silly blogs. 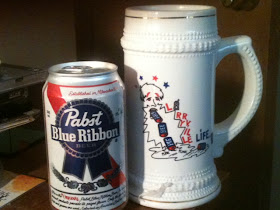