A Very Special Message from Denver's FaceMan / New Interview With Portland's There Is No Mountain: "Our goals are playing our music well and reviewing salsas and hot sauces around the country on a needlessly complicated logarithmic 12-point scale."


One of our favorite interviews from last year was with Denver's FaceMan, a trio of oddballs who rolled into town and found themselves playing an ill-fated gig at Barnyard Beer, which we believe is now defunct.  FaceMan will be back in LFK this Friday for the Replay matinee, promoting their new album TalkTalkTalk and once again playing alongside locals Til Willis and Erratic Cowboy.  We asked FaceMan to send us a blurb recounting their prior experience in Lawrence. It's included below, and we think you'll like it.

"I have performed in the middle of nowhere for two bartenders and an Indian." -Les Paul

"FaceMan, on the road for hours with only a shitty Denver music compilation to listen to, came to Larryville anxious to kick some ass last November 2012.  It was breathtaking and humbling to be in Larryville on the 157th anniversary of the Wakarussa War of 1855.

Driving past legendary libation-ing establishments like the Jackpot and the Replay we kept rolling. We passed all things familiar into the seedy underbelly of Larryville.  Rolling into the parking lot in the BACK of a shopping center, we said, "This can't be it." We feared that maybe Lawrence was here to kick OUR asses. Sure enough in the dingy basement of a 10,000 square foot poolhall, Round 1 of the title fight began.  We were in the blue corner.  We kept our feet moving.  Til Willis held some wires together while we played so the Public Address system would work (what a guy!).   My cousin and his buddies drove six hours from Garden City to watch FaceMan's Larryville debut.  Luckily they found some tickets and after the show their response:  "I had never heard of Barnyard Beer."  At last! We were bloody and home again.

Friday it's Round 2 and we return to deliver the aforementioned ass-kicking at the Replay Lounge with Til Willis. Who's ready for a good hard cry!?  RIP Barnyard Beer, we'll never forget." 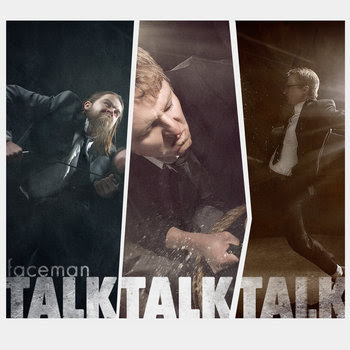 Readers, we're only interviewing bands from the hippest of cities these days!  Last week it was Brooklyn singer/songwriter sami.the.great and this week it's Portland Americana/psych-pop duo There Is No Mountain.  You can catch them in LFK this Sunday, June 2 at the Jackpot along with (yes) our buddy Til Willis!  [And Til also has a show at the Bottleneck on Saturday.  So it's possible to catch him THREE times in LFK this weekend.  He's approaching a damn near Tyler Gregory-level of omnipresence these days!]

There Is No Mountain's Matt and Kali were nice enough to chat with us about Zen koans, hot sauces, and what it's like to live in hipster-central.  Visit their official website here, check out the new self-titled album via Bandcamp here, and give them a "like" on FB here.


Richard:  Your Facebook bio says that the name There Is No Mountain is (at least in part) a reference to a Zen koan. What’s the full koan that’s being referenced?  And if you had to devise a Zen koan that perfectly describes your band’s sound, what would it be?

Matt:  Well, it's sort of more a reference to Donovan referencing a Zen koan, or depending on who you ask, a guide to meditating on a mantra (first you focus on it, then you go beyond it, and then you're focused on it again).  We don't know the full thing by heart, but we could certainly sing you the Donovan song.  I think Kali secretly wishes she could've lived on Donovan's island commune alongside Vashti Bunyan and a bunch of other awesome UK hippies.  Maybe if she had, she would've penned a koan about our music - something like: "A wise woman once came to our village.  We invited her to our home and she asked to hear our music.  We played one song from start to finish and when we were done, she picked up her banjo and played the whole thing back to us, only out of order.  'Isn't this how it really is" she asked.  We were immediately enlightened.'"


Chip:  I’m digging the song “Wave of Taboo” but what the hell IS a “wave of taboo” anyway?

Matt:  Ha, yeah, I guess that phrase made more sense in my head.  It's about how, no matter how many times our culture breaks a taboo and stops discriminating en masse against a group of people or a specific activity, there are always other things that even the most progressive among us are holding as taboos that don't need to be taboos.  An example would be people who take it for granted that slavery was wrong and that all races should be equal, but who turn around and don't support marriage equality.  In a decade, most of us will be like "wow, it sucked that it took us so long to support gay marriage", but there'll be something else we're fucking up on.  When we wrote that song, I was thinking about trying to get ahead of that wave and just accepting everything/everyone… I guess I'll bank on necrophilia.


Richard:   We’ve interviewed a surprising amount of husband/wife duos in the course of our bloggery.  Tell us about life on the road as a married couple.   Do you bicker about typical husband/wife problems or is it all about who fucked up a particular song during last night’s set?

Kali:  Well, first of all, we never fuck up on stage (ahem).  We were friends before we were bandmates, and we're both really easy going, so neither of us have taken a liking to bickering.  If you ask our friends, they can confirm that we pretty much never fight with anyone.  We try to take each day as it comes so we don't have much of an agenda on the road.  We agree that our goals are: playing our music well and pushing ourselves to try harder stuff each tour, taking on new adventures through couch surfing and exploring nature, and reviewing salsas and hot sauces around the country on a needlessly complicated logarithmic 12-point scale. The closest we've come to a fight is whether or not to get olives on something (I'm pro, and Matt is a hater).


Chip:  Of course, I have to ask about living in Portland.  From what I’ve learned (mostly by watching Portlandia) it’s almost insufferably full of itself!  True or false?  Also, have you ever met Carrie Brownstein?

Kali:  Hah, I'm originally from New Jersey (the other most made fun of state) and I love both my hometown in NJ and Portland, OR, so I either have bad taste, or the media sucks at properly portraying US states on popular television.  Either way, Carrie and I are definitely friends, but only really in the sense that I know where she lives and sometimes sneak in her house to water her plants.  And as for living in Portland: it's amazing.  Let's try a thought experiment: take Los Angeles, but make it a less sprawled, give it real seasons and weather to keep boring people out (I said it), make it so that you don't have to drive anywhere, replace overpriced restaurants and bars with dives that have inexplicably gourmet menus, and fill it with unemployed artists who can afford to be unemployed because it's so cheap.  Doesn't that sound awesome?


Richard:   The Jackpot on a Sunday night is, sadly, not always a very happening place.  Leave our readers with a blurb that convinces them to take a chance on There Is No Mountain after they’ve already spent their weekend in the bars swilling PBR.

Matt:  TINM puts on a show.  All you have to do is sit back and enjoy.  On our end, we just try to keep things interesting for ourselves, but every night we hear things like "I can't believe two people were able to make that much sound", and also, "I want to get lost in Matt's beard".  If you come listen to us, you'll hear African hi-life, musical theater, psychedelia, and jazz and classical harmony poking through an Americana band.  Just keep your PBR away from me: Portland has turned me into a beer asshole.


Chip:    Oh, oh, one more thing.  I just read that one of Matt’s goals is to “fly in a civilian spaceship before he dies.”  Do you guys believe in life in outer space?  And, if so, what do you think it’s like?   Maybe sort of like Portland?

Matt:  Definitely, but I'm not in it to meet ET; I'm in it to stand on the moon and do that pretending-to-crush-something-huge-with-your-thumb-and-index-finger thing with the earth.