New Interview: Olassa's Cain Robberson Stops By To Chat Before a St. Patty's Showcase at Replay

If you've been paying attention to the twangier side of Larryville music in recent years, you're no doubt familiar with Allison Olassa from various projects (sometimes rocking a sweet accordion!). These days Allison is in the 3-piece Olassa, who'll be entertaining all of us drunks down at the Replay around 3:00 on St. Patty's Day. We talked to Olassa's Cain Robberson recently about the band's photogenic ways, hanging out with Gillian Welch, and their first EP, which is coming your way later this year.

Visit their FB page here and enjoy the interview.


Richard: We’ve seen Allison playing with a number of different line-ups over the years? Does Olassa have a stable line-up these days, and how would you describe the “Olassa sound," ideally using some pompous Pitchfork-style music writing and perhaps one of those "we sound like ______ meets _________" comparisons that music writers love so well?

Cain: Hmmm, stability? Well, when we started, Allison wrote all the songs in her band named Allison Olassa and Company. I wrote the tunes in the band Tiny Tuxedo which Allison was also in. We tried to make the two bands work independently but decided to slim down by adding all the songs into one band, Olassa. We added multi-instrumentalist Tyler Bachert and now have a stable three piece which may be added to later... If we were to give a pompous sound comparison, it might go something like... Gillian Welch with a little of The Felice Brothers. Now I feel dirty, thanks a lot.

Richard: We once saw you open up for Dave Rawlings Machine at the Granada? (A) Was that the coolest thing ever? And (B) did you have any interaction with Dave and Gillian?

Cain: Opening for Dave Rawlings Machine was an unexpected delight. We got a call (all last minute style) from Granada asking if we would open for the show we were already going to attend. We screamed some expletives and settled in to the fastest pre-show practice the great town of Lawrence had ever seen! While on stage, Allison accidentally put on her accordion upside down; we then performed such classics as "Airline Stewardess" and "Spies". After our set, we waited backstage like experienced stalkers for Gillian to come out of her dressing room. She did. We met, and she smelled just like freshly brewed jasmine tea! It was grand! Also, we met the principle song writers of Old Crow Medicine Show who were backing up Dave and Gillian. Dreamy, I tell you, just dreamy.


Chip: What’s the story on those utterly bad-ass, vintage-looking pictures on your FB page where you’re posing with guns and such? And who can I contact about potentially getting some similar shots taken of myself, perhaps wearing a fedora and sporting a boner?

Cain: We get a lot of people asking about the Olassa band photos on our Facebook site. And I'll tell it to you like I tell everyone... Every picture we take ends up looking like that. Ok, well not exactly like that, but we like to think it's very close. Actually that Neil Krug photo shoot was the result of bartering with a close friend of the band named Cherie Yvette. She has a history of being supremely fabulous just for the sake of being supremely fabulous! Here's how it went down... Olassa got dressed to the nines, grabbed a pistola and an accordion and headed down to the tracks. We vogued all badass and click, poof, clang, we were famous. 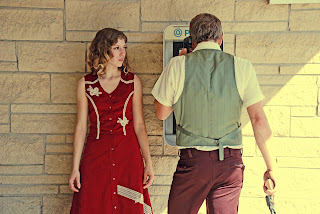 Richard: What can we expect on St. Patty’s day at the Replay? Will the band be as blitzed on green PBR as the audience will?

Cain: As far as expectations for the Replay show on St. Patrick's: expect the sheen of a brass tuba sauntering on the stage as an accordion wheezes a wonderful original. Imagine three-part harmonies soaring through the air like a child's kite tethered to a single string. Expect that you and a few hundred of your closest friends will be shaking, moving, and dancing about to the extent that your once white chucks will be stained with rich green American beer.

Cain: In 2012, we will be releasing our first EP named White Down (working title). To support the album, we are planning out several regional tours. Also, we are creating mucho merch for the impoverished and working class alike! Come to the Replay around 3 on St. Patty's Day and tell 'em Tyler Bachert sent ya!
Posted by Nog at 7:27 AM