When we arrived (late) to Love Garden for the "avant-garde" Earth Day concert last night there was dead silence in the room. We assumed--and hoped--that the participants were engaged in a "performance" of John Cage's 4'33", but it turned out we'd simply shown up during a pause between Asian gong pieces which were performed by a motley collection of scenesters, musicians, and two young girls who were all beating, tapping, and scratching on gongs (accompanied at times by two violins). The spectacle was visually, if not aurally, interesting, and at one point the performers almost stumbled upon a rhythm by accident. Overall, the event accomplished what the best "experimental" works should: it made us feel stupid. But of course we pretended to "get" it, because we didn't want to seem unhip.


Chip: "I worry that those children in the performance will grow up without being taught that music should have a melody. And some lyrics wouldn't hurt either."

(yes, that's meant to sound like "bong hits"...this event should really have been held two days previously, on 4/20, when all of Larryville was pleasantly baked and might have better understood it).

Perhaps some of you are planning to get "pleasantly baked" before tonight's psychedelic freakout with the Black Angels' at the Bottleneck? The band is coming off two sold-out shows earlier this month at NY's Bowery Ballroom and Williamsburg's Music Hall. Will Larryville show them some love? Or stay away because it's at the Bottleneck and ticket prices are too high?

Pitchfork gives a decent 7.2 to the Angels' latest, Phosphene Dream, which "finds the band peeling back the psychedelic murk and tempering its bad vibes with a hint of flower-power homage."

Local hipsters: "We preferred them before the bad vibes were tempered. We'll pass on this show and wait for the Shilpa Ray and Her Happy Hookers gig at the Jackpot on Monday."

How in hell are the Spook Lights NOT opening this show?

"Lawrence Fire crews responded to the 700 Block of West 25th Street after receiving a report of a ceiling fan that had caught fire and fallen to the floor. The caller also advised that a toilet was also had been on fire."

The writer sounds as drunk as the folks who set the ceiling fan and toilet on fire.

We also enjoyed the recent Channel 6 coverage of Larryville's mysterious graffiti bandit who spray paints "AJAX" everywhere (sir, you are no Banksy!). We were hoping that the "SHOUT PEACE" graffiti at the Oread would usher in a golden age of Larryville graffiti, but "AJAX" is starting to bore us.

Check out the Channel 6 story and video here 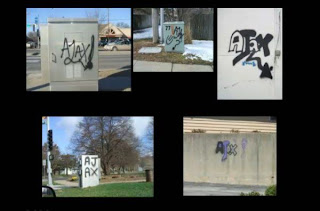 AJAX is simply the lamest vandal we have in town. I'd beat that guy senseless just for being a dork.